Labour must step up its attack on the “crony-capitalist crime” of construction company Carillion, former MP George Galloway says. “Capitalism isn’t working… Unleash the dogs of war!” he tweeted.

It was announced on Monday that Carillion is going into liquidation after being overwhelmed by huge financial difficulties, throwing the futures of 43,000 employees into turmoil. Huge government contracts for nearly 900 schools, 50,000 Ministry of Defence homes, and hospitals across the UK are held by the crisis-hit firm saddled with a £1.5 billion ($2.07 billion) debt, sparking a rush to discover which projects could be in jeopardy.

Galloway called the “crime of Carillion” an “ideological cleft.” He tweeted: “Labour must step up its attack on the crony-Capitalist crime of Carillion… State bankrolled capitalism for the few by the many. First the banks then this.”

Labour must step up it’s attack on the crony-Capitalist crime of Carillion. Its an ideological cleft. State bankrolled capitalism for the few by the many. First the banks then this. Capitalism isn’t working. Systemic bankruptcy. It’s havoc. Unleash the dogs of war! #Carillion

His comments come as the Tory government has asked independent authorities to investigate the causes behind the construction company’s foray into liquidation and to determine whether or not fat cat bosses had anything to do with Carillion’s collapse.

On Tuesday, Labour called for a public inquiry after it was revealed that chief executive Richard Howson was being paid £660,000 for a year after he resigned. The party also wants to know why Tory ministers gave the building firm more than £1 billion in new contracts despite a profit warning in 2017. 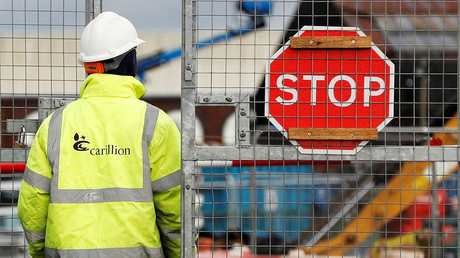 Labour Shadow Chancellor John McDonnell accused the government of “drip-feeding more contracts to Carillion to buoy up an obviously failing company,” and has demanded “a full public inquiry immediately to find out exactly what’s happened.”

“The Carillion collapse has raised real suspicions that the government was too close to this company and too wedded to its privatisation role,” he added.

On Tuesday, Business Secretary Greg Clark wrote to the Official Receiver requesting that its probe considers “any individuals who were previously directors.” The probe should also consider “whether their actions may have caused detriment to its creditors – including detriment to any employees who may be owed money.”

Clark added: “He [the Receiver] should also consider whether any action by directors has caused detriment to the pension schemes.

“I also ask that the Official Receiver expedites his investigation which will also specifically consider the extent to which the conduct of the directors of Carillion PLC led to its insolvency.”