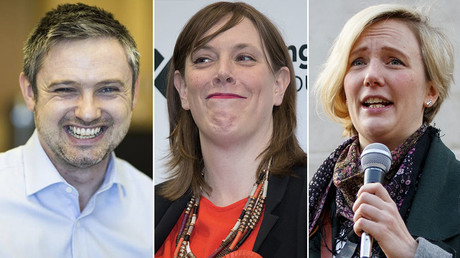 Blairite Labour MPs have been accused of hypocrisy after an apparent subdued or non-existent response from some to John Woodcock’s suspension from the party after it was claimed he sexually harassed a former female staffer.

Social media users have accused the likes of Jess Phillips and Stella Creasy of double standards with their silence on the Woodcock case standing in contrast to the vocal condemnation of a Jeremy Corbyn ally following the suspension of MP Kelvin Hopkins on claims of sexual misconduct in November 2017.

Woodcock, Phillips and Creasy have been a part of a group of Labour MPs critical of Labour leader Jeremy Corbyn, with all three supporting Owen Smith’s failed leadership challenge in 2016.

At the start of the year, Phillips, Labour MP for Birmingham Yardley, had explicitly called for Hopkins to be removed from the Labour party, without full due process having taken place.

At the start of the year @jessphillips accused Corbyn ally Kelvin Hopkins of “victim blaming” when he released a statement after being accused of sexual harassment. Today she claims theres urgent need for independent investigation after John Woodcock is accused. #BlairitesOUTpic.twitter.com/uID5EUFoZm

However, Phillips seems to have a different attitude and approach when it comes to her colleague John Woodcock, calling for an ‘independent investigation’ to take place into the matter.

I cannot think of any reasonable argument about these complaints being handled by a completely independent investigator. The only reason to disagree is if you want to weild power and influence. I am meeting @JennieGenSec soon to discuss this and I hope she agrees. https://t.co/VvvUDe6a9J

The usually outspoken Phillips, who once vowed to metaphorically ‘knife’ Corbyn, appears to have resorted to a more measured response in light of Woodcock’s harassment allegation.

Instead of outright condemnation Phillips’ has instead opted for a cooler approach with suggestions on how to improve the complaints process.

Creasy, MP for Walthamstow, had accused those who have questioned the veracity of the accusations leveled at Hopkins as indulging in “victim blaming.”

Championing the issue, she spoke out through print, broadcast and online media outlets, during the spate of MP sexual misconduct allegations that surfaced last year, suggesting that people should be able to throw out their local MP if they’re found guilty of sexual misconduct, remarking: “In any other job, you’d lose your job,” according to Buzzfeed.

There has been no response on Ms Creasy’s Twitter feed thus far to Woodcock’s suspension.

On Twitter, where much of Labour infighting seems to take place, opposing views on the suspension are being argued over; ranging from theories that Corbyn’s office has been looking for an excuse to suspend the MP and accusations of “selective outrage,” to pleas that due process takes place.

Let John Woodcock get his due process during this investigation even though it is something he has tried to deny others. https://t.co/uRrfLBFvkq

Remember, sexual harrassment is a very serious allegation and we have to make sure due process is followed and not prejudice the investigation. It doesn’t matter that Woodcock is anti-Corbyn – we have to treat all accused the same way regardless of their affiliations.

John Woodcock suspended over alleged sexual harassment of women, but no words of condemnation yet from the shrinking violet @jessphillips. It’s almost as if her outrage is selective.

My gut feeling about Labour MP John Woodcock is that he is brave and decent – and that his party leadership (not so cuddly) bristles at his independence.

On 8 April I wrote this about John Woodcock: “Corbyn’s team spent a day drawing up a hit-list of their biggest critics” [an MP] informs me “and Woodcock is top of their list. They’re currently trying to think up a way that they can justify suspending him”.

re John Woodcock, plz don’t tweet about him as “anti-Corbyn” MP etc. sexual assault allegations are incredibly serious and must be investigated imminently. that’s what matters here.

Woodcock, has released a statement stating that he does not accept the charge being brought against him but “has been cooperating fully with the process and remains committed to a thorough and fair investigation of the case.”

He goes on to say that because details of his case were made available in the press by a Labour staffer, privy to the issue before his suspension, there is a “question mark over the integrity of the process.”

In a statement, a Labour Party spokesperson said: “John Woodcock has been suspended from the Labour Party pending due process. It would not be appropriate to comment further on an ongoing case.”