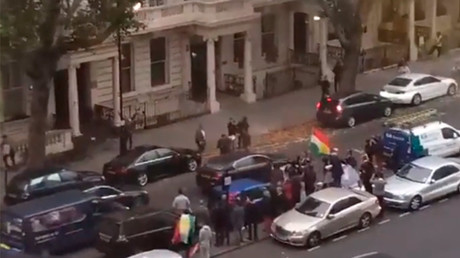 Kurdish protesters staged a demonstration outside the Iraqi embassy in London as the country’s military continued its assault on the Kurdish city of Kirkuk in the north of Iraq.

Protesters gathered outside the embassy on Monday afternoon as the Iraqi military closed in on the oil-rich region. In a video posted on social media, one protester can be seen hurling an object through a window.

In another, a number of protesters can be seen kicking a door of the building, trying in vain to gain access.

Monday’s military action saw troops take the city under Iraqi control in a matter of mere hours. Soldiers raised the Iraqi flag over key buildings in the city, following orders by Prime Minister Haider al-Abadi that the flag be hoisted over Kirkuk and other areas under Kurdish control.

Kurdish Peshmerga forces have said that the move into Kirkuk represents “a flagrant declaration of war” and vowed that Iraq will pay a “heavy price.” They further described Baghdad’s assault as “retaliation against the right of the people to vote on their fate,” in reference to last month’s referendum on Kurdistan independence.

The Iraqi PM earlier said the operation was aimed at protecting the unity of Iraq following Kurdistan’s independence vote.

“It is my constitutional duty to work for the benefit of the citizens and to protect our national unity that came under threat of fragmentation as a result of the referendum that was organized by the Kurdish region,” al-Abadi said in a statement.

Kirkuk is an oil-rich province claimed by both the Kurds and the Iraqi central government. It is thought to have a Kurdish majority, but its provincial capital has large Arab and Turkmen populations.

Peshmerga forces took control of much of the area in 2014, when Islamic State (IS, formerly ISIS/ISIL) swept through most of northern Iraq.