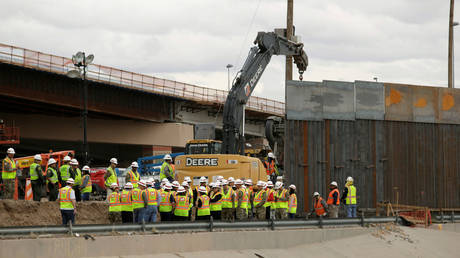 Questioned if President Donald Trump’s plan to divert funding for his border wall with Mexico out of existing budget commitments would deprive Kentucky children of a new middle school, Lindsey Graham would not give an inch.

The White House announced last Friday that $8 billion would be spent on constructing the barrier, out of which only $1.4 billion has been allocated by Congress. This means that over $6 billion will have to come from other sources, with most of that money likely reallocated from military construction plans.

On Sunday, Graham, the Republican senator from South Carolina, was asked on CBS whether it would be appropriate for other projects “including construction of a middle school in Kentucky, housing for military families, improvements for bases like Camp Pendleton [in California] and Hanscom Air Force Base [in Massachusetts]” to be sacrificed for Trump’s pet project.


“The president will have to make a decision where to get the money,” Graham told host Margaret Brennan.

“I would say it’s better for the middle-school kids in Kentucky to have a secure border. We’ll get them the school they need. But right now we’ve got a national emergency on our hands.”

Graham: “It’s better for the middle school kids in Kentucky to have a secure border. We’ll get them the school they need, but right now we’ve got a national emergency” pic.twitter.com/Vty1rbx979

Noting the role of the wall in preventing the opioid crisis – a favored recent justification deployed by Republicans – Graham bemoaned the recalcitrance of lawmakers to give extra funds to the White House.

“I think that every member of Congress has watched three presidents send troops to the border: Bush, Obama, now Trump,” Graham said. “Not one of us have complained about deploying forces to the border to secure the border. It’s pretty hard for me to understand the legal difference between sending troops and having them build a barrier.”


Once considered a middle-of-the-road, if hawkish, Republican, Graham has become one of Trump’s most vocal advocates since his election in 2016, and told Brennan he endorsed his decision to declare a national emergency to allow himself more leeway on spending federal funds.

“Unfortunately, when it comes to Trump, the Congress is locked down and will not give him what we’ve given past presidents. So, unfortunately, he’s got to do it on his own and I support his decision to go that route,” Graham said in reference to the national emergency declaration, which critics have attacked as a precedent-setting abuse of executive power.