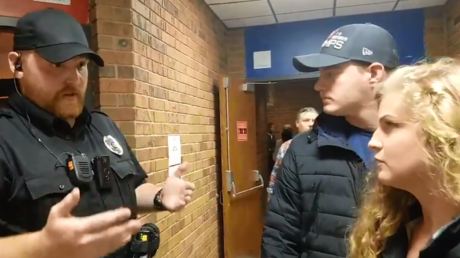 Infowars’ Kaitlin Bennett, best known as the Kent State Gun Girl for flaunting an AR-10 rifle at her graduation, has been kicked out of a Bernie Sanders campaign event, which appears to have been members-only.

Bennett, who earned her nickname after a photo in which she posed with a rifle on the Kent State University campus went viral, made an unsuccessful attempt to attend a Bernie Sanders event in Lordstown, Ohio on Sunday. As soon as Bennett settled into one of the front rows, she was approached by a security guard who asked her to leave. Bennett uploaded video of the verbal exchange to Twitter.

I am a conservative journalist and was just ejected from a @BernieSanders rally for expressing my 1st amendment. I was just sitting there and was told I had to leave, with no reason given except that his campaign didn’t want me there. THIS is actual fascism. pic.twitter.com/iyaMwAHMMU

In the video, the guard dodges Bennett’s questions as to whether she has violated any rules and repeatedly askes her to leave, while seeming to imply that it was a private event.

“So, I’m being ejected from a public event?” Bennett asks, before reluctantly following the guard out of the hall. Outside the room, she spars with another guard who appears to be more sympathetic, but asks her to leave nonetheless.

The police officer agreed with me that I did nothing wrong, but booted me anyway. On my way out, the private security officer told me he supports me but has to do his job. Thank you @BernieSanders for exposing how intolerant the left really is towards dissenting opinions. pic.twitter.com/lzFX1s8gjP

When outside, Bennett goes on a lengthy rant about being “discriminated against” because of her affiliations.

“What we just saw was Bernie Sanders’ campaign discriminated against a certain journalist. I’m a journalist for InfoWars.com, we are a news outlet. I’m a woman journalist and I got ejected from a Bernie Sanders town hall event.” Bennett, a Trump supporter, then takes aim at the opposite camp, arguing that if they do want to convert her, they should let her listen to them instead of kicking her out.

She insists the event was advertised as public on Sanders’ website, promising to post a screenshot to prove her point.

However, Bennett has not provided the image yet, and it appears from previous reports in local media that the event was actually closed to the general public. It was hosted at Lordstown High School by the American Federation of Teachers (AFT), which invited Sanders to talk to members of its Lordstown chapter, the Tribune Chronicle reported on Thursday. Citing AFT spokesman Andrew Cook, it said the event would be members-only.

Moreover, the event does not appear to be listed on Sanders’ Facebook page.

Bennett’s stunt drew mixed reactions on Twitter. Conservative commenters hailed her, calling Sanders “a communist dictator” and her treatment at the event a violation of her First Amendment rights.

People are becoming so divided they can’t even attend rallies anymore.

If people can’t be exposed to new ideas then what happens next? https://t.co/aDlTxZXhNO

Liberals denounced her actions as a PR stunt, laughing off her journalistic credentials.

She’s not a journalist. She’s that ridiculous ‘gun girl’ who posed at Kent State with her AR 15. She was probably hoping to pull some publicity grabbing stunt. They were wise to toss her out!

It’s amazing to me that the Kent state gun girl gets so much promo but clearly has not found a way to monetize it if she is wearing a Hollister coat….

Since rising to fame in May 2018 on the back of her photo statement and scathing attacks on Parkland shooting survivor-turned gun-control proponent David Hogg, Bennett has taken on a journalism career. Most recently, the conservative-libertarian activist has been associated with InfoWars.