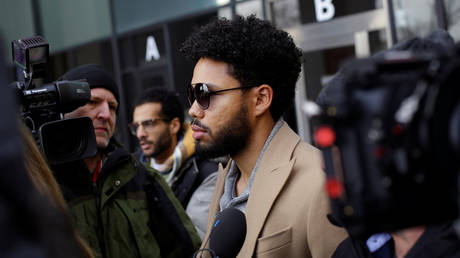 The producers of the TV drama Empire have decided to “remove” Jussie Smollett from the show after the actor was charged with felony disorderly conduct for faking a hate crime against himself.

With only two episodes left in its fifth season, the producers of the Fox network drama have released a joint statement announcing that Jussie’s character will be cut “to avoid further disruption on set.”

“The events of the past few weeks have been incredibly emotional for all of us,” they wrote, adding that “While these allegations are very disturbing” they are “placing [their] trust in the legal system as the process plays out.”

The statement was a stark reversal from the one the studio sent out just a few days ago where they explicitly stated that he was “not being written out of the show.” The tone began to change slightly after his arrest, when the producers announced they were “exploring their options.” There is no word yet on whether the decision will be made permanent.


Smollett was arrested on Thursday on charges of faking a police report. Shortly after being announced as a suspect in a hoax hate crime, the actor reportedly turned himself in. In his initial statement to the police, he claimed that two white men had jumped him and put a noose around his neck while shouting racist and homophobic slurs. He also said that the two had shouted “This is MAGA country” in an effort to implicate Trump supporters.

It turned out, however, the pair were two Nigerian immigrants and extras from the show, who allege that Smollett paid them to stage the attack. The two were caught on camera casually picking up the supplies they needed, and handed over the $3,500 checks the actor wrote them to the authorities.

Despite the mounting evidence, both Smollett and his attorney continue to maintain his innocence. Police, however, told reporters on Thursday that they believe he had staged the attack because he wasn’t happy with how much money he was pulling in on the set of Empire.

The studio isn’t the only one to shy away from Smollett after the narrative of a “racist and homophobic” by Trump supporters began to fall apart. Some of the many high-profile figures who had been quick and vocal in their support for Jussie, including House Speaker Nancy Pelosi, began quietly deleting their tweets, but not before someone saved the receipts.