The judge overseeing the corruption case involving US Senator Bob Menendez said he won’t dismiss any of the charges against the New Jersey Democrat. Menendez is facing 12 federal charges, including bribery, conspiracy and fraud.

Prosecutors say that Menendez accepted free flights on a private jet and other gifts from a wealthy Florida doctor in exchange for lobbying the government on his friend’s behalf and securing improper Medicare reimbursements.

On Monday, US District Judge William Walls rejected the defense lawyers’ motion to drop the charges. Menendez’s defense team argued the charges did not meet the narrow definition of bribery established by the 2016 US Supreme Court ruling that reversed the conviction of former Virginia Governor Bob McDonnell.

Breaking: “We are going to the jury.” Judge Walls dismissed Menendez motion to toss case, case will continue to defense today.

In recent months, the McDonnell ruling has led judges to throw out bribery convictions of at least three other former public officials, including a Pennsylvania congressman.

Walls’ rejection of the defense lawyers’ arguments is a victory for prosecutors, who had said that dismissing the charges would torpedo nearly all other bribery cases and open the door wide to graft.

The 63-year-old Democrat was indicated two years ago by federal prosecutors on 12 counts, including charges of bribery, conspiracy, honest services fraud and violations of the Federal Travel Act.

“The purpose of the conspiracy was for the defendants to use Menendez’s official position as a United States senator to benefit and enrich themselves through bribery,” the indictment said.

Florida ophthalmologist Salomon Melgen is alleged to have lavished the senator with private flights to the Caribbean and France, expensive meals, golf outings, cash donations and other gifts in exchange for political favors that included intervening in an $8.9 million Medicare billing dispute, the Justice Department said. 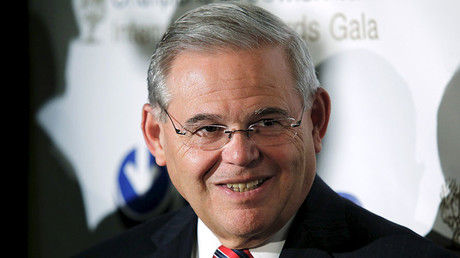 Menendez has admitted flying as a guest of Melgen on at least three occasions, but said he paid back the cost of those flights years later, after being questioned about them.

“Menendez withheld information from his senate staff to conceal the extent of his official action on Melgen,” prosecutors also alleged.

The indictment also said Menendez did not report any of the gifts or travel on his annual financial disclosure reports, which he was obligated to do under the Ethics in Government Act of 1989. The purpose of the financial disclosure forms is to reveal, monitor, and deter conflicts of interest.

The indictment also claimed Menendez solicited hundreds of thousands of dollars of contributions from Melgen to entities that benefited the senator’s election campaign and a separate legal defense fund. There was a $751,500 donation to his 2012 re-election campaign to the Senate, another $143,500 to the New Jersey Democratic State Committee to benefit the Menendez campaign, and other contributions ranging from $10,000 to $20,000.

Defense attorneys called the indictment “hopelessly vague and defective,” adding that the two men have had a 20-year bond of friendship that had little to do with politics. Much of the indictment describes actions by Menendez’s staffers, rather than the senator himself, “and many involve trivial functions rather than officials acts,” the defense lawyers argued, according to the New Jersey Star-Ledger.

If Menendez is convicted, he could face up to 20 years in prison for the most serious charge of honest services fraud. He currently sits on the Senate foreign relations, banking, and finance committees.