A judge has narrowed the scope of search warrants obtained by federal prosecutors to gather identifying information on an estimated 6,000 Facebook accounts linked to alleged organizers of the anti-Trump inauguration protests.

Federal prosecutors will now be required to file a report with the court, explaining how their search protocols are only intended to uncover evidence of criminal activity related to the warrant. If the protocol is approved, Facebook will be ordered to provide the government with redacted data to hide the identifying information of the users who were not directly related to the scope of the warrant.

The government must then explain how the materials are relevant to the investigation before the data can be un-redacted. Finally, the government was ordered to permanently delete any data that does not fall within the scope of the warrants.

“While the government has the right to execute its warrants, it does not have the right to rummage through the information contained on the Facebook accounts and discover the identity of, or access communications by, individuals not participating in alleged criminal activity, particularly those persons who were engaging in protected First Amendment activities,” Morin wrote. 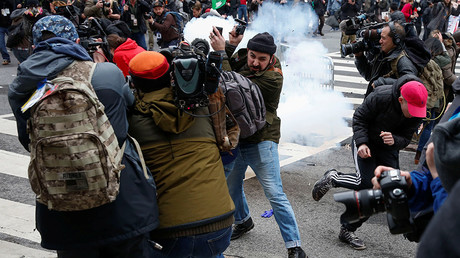 The ruling comes after the Department of Justice obtained search warrants for three separate Facebook accounts as part of its probe into the violent protests on January 20, 2017. On the day of Trump’s inauguration, police arrested more than 200 people who were charged with felony rioting.

In February, DC Superior Court Judge Robert Wertheim authorized three search warrants to allow the government to search the Facebook accounts of DisruptJ20, lacymacauley and legba.carrefour after finding probable cause that they contained evidence of “rioting or inciting to riot.”

The Trump administration requested Facebook to provide federal prosecutors with extensive personal information on the users, including their names, birthdates, telephone numbers, email addresses, passwords and security questions, physical addresses, IP addresses, credit card numbers, and “all known identifiers for the device(s) used to register or access the Account.”

The Justice Department also sought the user’s friends list, photos, videos, searches, as well as any data they had ever deleted.

The government indicated that it would conduct a “front-to-back” search of the individual accounts, for all data from November 1, 2016, just before the presidential election, up to February 9.

Morin said that the warrants “did not include any limiting safeguards to explain how the government would compel the production of data containing criminal evidence.”

He added that the searches would lead to the government “over-seizing” unrelated data “that it has no probable cause to collect.”

However, Morin allowed the government to review the communications of the two individual accounts, and “determine for itself whether, and to what extent, there is evidence of criminal activity.”

The owners of the DisruptJ20 (now Resist This) page, lacymacAuley and legba carrefour, were never charged with inauguration day-related offenses.

Scott Michelman, Senior Staff Attorney at the American Civil Liberties Union (ACLU) of the District of Columbia, applauded the judge for imposing safeguards, but said he was “not equally careful” to protect the First and Fourth Amendment rights of the account owners.

“Our clients, who have not been charged with any crime, except that when they send private Facebook messages about, for instance, their medical history or traumatic events in their lives, those messages will remain private unless the government shows probable cause to search those particular messages, which it has not done.” Michelman said in a statement.

In July, another judge granted a warrant allowing the government to gain access to 1.3 million IP addresses of people who visited the DistruptJ20 website. The website’s host provider, DreamHost, opposed the request and the court ordered similar safeguards be implemented.