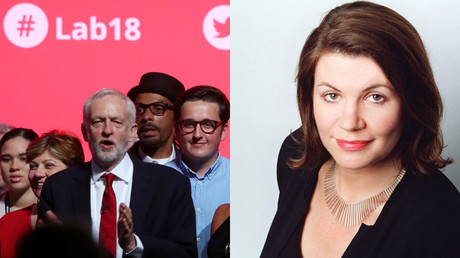 Julia Hartley-Brewer, a presenter on Talkradio, has been banned from next year’s Labour Party conference after joking about a “safe space” room there. Twitter is debating whether the remark was offensive or just free speech.

Hartley-Brewer, who attended this year’s Labour conference in Liverpool, has been told by party officials that despite her clarification on comments made about a “safe space,” she was being banned because “material considered offensive remained on social media.”

A Labour spokeswoman confirmed: “We reserve the right to decide who we accredit for our events. Julia Hartley-Brewer had no right to use our conference facilities to mock disabled people, so she will not be welcome next year.

“We received multiple complaints about Julia Hartley-Brewer’s behavior during [the] conference, including from Disability Labour, and she caused considerable distress to vulnerable groups, including to delegates with conditions including Asperger’s, autism and anxiety disorders.”

The row centers on a five-second video that Hartley-Brewer posted on Twitter, showing the former Sunday Express journalist in a Labour conference room labeled “safe space.” She says the word “boo” to camera with an accompanying tweet that read: “Comrades, if you’re feeling triggered at the Labour Party conference, don’t worry, we’ve found the official #SafeSpace.”

She received a backlash from those on social media who accused her of mocking people with special needs such as Asperger’s, autism, and anxiety disorders. One such individual told Hartley-Brewer that the “safe space” was for “autistic people like me who suffer from being overwhelmed by our senses.”

Hartley-Brewer’s defense was that the sign on the door said the room was for “anyone.”

Its for autistic people like me who suffer from being overwhelmed by our senses.

Noise, crowds, too much stuff going on can cause issues for us.

A safe space allows us to regroup and still participate.

Are you saying people like me should be excluded from taking part?

That you feel the need to mock this space for people who are autistic, may suffer anxiety attacks, may just have gotten a catastrophic call about a loved one says everything about you. May you desperately need that safe space one day, be denied it, & have that need mocked.

She has called the decision “Orwellian,” “sinister,” and a “blatant attack on freedom of speech.” She added: “I am being punished for the thought crime of making a joke they didn’t find funny. It’s like something out of 1984.”

The row has prompted debate over ‘freedom of speech’ and whether people should be free to mock anyone, regardless of their personal situation. Hartley-Brewer has found an ally in Nigel Farage, the ex-UKIP leader, who accused Labour of telling people what they “can and can’t joke about.”

James Cleverly, deputy chairman of the Conservatives, has called Labour “thin-skinned, petulant and humorless” for the decision.

In my opinion anyone who uses that room is doing so for attention. If you agree, disagree, are offended by/with my opinion it really doesn’t matter as I’m allowed to hold it and voice it.

It’s a disgrace
Free speak, public and press scrutiny should be encouraged not suppressed