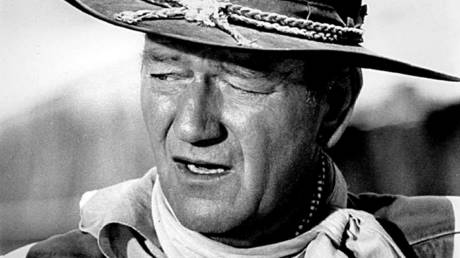 Speaking to Playboy magazine almost 50 years ago, Wayne unleashed a series of statements that would have him fired, sued, tarred and feathered if he uttered them in 2019. Wayne referred to “healthy, lusty sex” between a man and a woman as “wonderful,” but called homosexuality “perverted,” dismissing the Oscar-winning ‘Midnight Cowboy’ as “a love story about two f*gs.”

‘The Duke’ then slammed calls for reparations for Native Americans, saying “they should pay as much for Alcatraz as we paid them Manhattan.” Wayne blasted Hollywood for its “tokenism” and told Playboy that “we can’t all of a sudden get down on our knees and turn everything over to the leadership of the blacks.”

“I believe in white supremacy until the blacks are educated to the point of responsibility,” Wayne stated. “I don’t believe in giving authority and positions of leadership and judgement to irresponsible people.”

I was a 16 in 1971. I’ve known John Wayne was a scmuck and a bigot since he started doing interviews. Times may have been different doesn’t excuse his bigotry.

It exists, but it’s outdated. It is out there, but it isn’t acceptable. I was raised in the South as well. My father’s family goes back deep in the South for generations. He called it unacceptable when he growing up in the 50s. John Wayne’s ideas were out of date by 71

However, as more pointed out, Wayne’s opinions were typical of the time. “Who would have thought an interview from a 1971 edition of Playboy would contain outdated views,” wrote comedian Jonathan Pie. “Is there any way we can dig up his corpse and make it apologise?”

John Wayne, eh? Who would have thought an interview from a 1971 edition of Playboy would contain outdated views? Is there any way we can dig up his corpse and make it apologise?

If you weren’t at least in your mid-teens in 1971, you are clueless as to what people were thinking, saying, and doing at that time. I’m not allowed to write the words describing gay people and those who weren’t Caucasian that were used. The opinions of John Wayne were the norm.

John Wayne died in 1979. The fact that some people are outraged now over what he said in a 1971 Playboy interview is just peak outrage culture. It’s not only ridiculous but it cheapens truly egregious events worthy of real outrage and attention. It’s like crying wolf every time.

Wayne died in 1979, eight years after the interview. In the years since, parts of the interview have popped up to cause controversy. When Republican state Assemblyman Matthew Harper tried to have the actor’s birthday (May 26) commemorated in California as ‘John Wayne Day’ in 2016, a Democratic assemblyman argued against it, reading Wayne’s ‘white supremacy’ quote to the assembly floor.

The interview did the rounds again that same year, when Wayne’s daughter Aissa endorsed then-candidate Donald Trump for president.