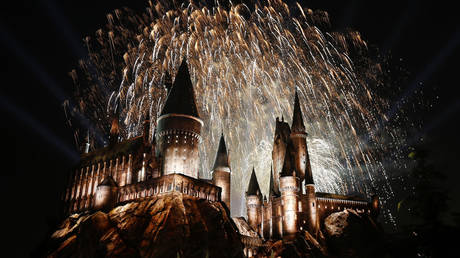 JK Rowling gave Harry Potter fans some material for their nightmares when she revealed that before plumbing was installed in Hogwarts, students and teachers merely “went” on the floor and magicked away their waste.

Rowling shared this disconcerting truth in a post on Pottermore, the website she uses to communicate with her fans. It was part of a larger anecdote on the “Chamber of Secrets” for which one of the Harry Potter books is named, but no one really paid attention to the rest.

Hogwarts didn’t always have bathrooms. Before adopting Muggle plumbing methods in the eighteenth century, witches and wizards simply relieved themselves wherever they stood, and vanished the evidence. #NationalTriviaDay

From the floor and their ass? Or just the floor? Did they still have to wipe?

Could they not even have designated places in which to do this? They just did a shit on the floor? I know we are talking about wizards vanishing their own poo but I’m unconvinced.

No transition period at all? What kind of absolute tragedy made them make the RADICAL switch from vanishing to actual plumbing? Giving me the fear

As usual when “it’s magic!” is invoked as an explanation, there were some logical flaws in the setup.

Besides, where does it vanish to? Wasn’t there a passage in Deathly Hallows where Hermione was talking about the laws of transfiguration, saying you cannot make things out of nothing, and you cannot actually banish something into nonexistence? I mean, it has to go somewhere.

Considering they learn vanishing spells after a few years at school. The professors must have been adept at watching for strained faces during lectures.

A few pointed out that indoor bathrooms have been around for quite a bit longer than Rowling thinks – indeed, even the most primitive medieval setups had some kind of privy room, even if it was just a hole in the floor that led outside the castle walls.

wiZaRdS aRE so aDVanCeD though.

CASTLES ALWAYS HAD TOILETS! HOLES IN THE WALLS! BUCKETS! Why wouldnt wizard castles have it too. Who came up with this “fact”? Surely not JK herself.

Others saw the tweet as the logical outgrowth of Potter fans’ desire for ever more salacious trivia – and Rowling’s willingness to feed that hunger.

But most people were just grossed out.

Some things are better left unsaid. This is definitely one of those things.