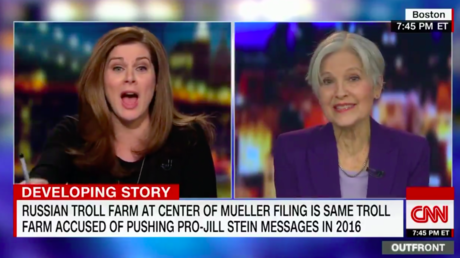 Former US Green Party candidate for president Jill Stein has accused CNN of trying to “blame and shame” independent voters by editing an interview to make it seem that she was responsible for Hillary Clinton’s loss in 2016.

Stein’s CNN appearance on Wednesday quickly turned antagonistic, with host Erin Burnett insistent on pushing blame for Clinton’s loss on the former presidential candidate, repeatedly telling viewers that Stein’s presence in the race was a “very important” factor in Clinton’s defeat because she received more votes than Donald Trump’s margin of victory in important states like Michigan, Pennsylvania and Wisconsin.

CNN tweeted this interview with a quote implying I made Clinton lose. Funny that they cut out the first 3 minutes where I talked about Ranked Choice Voting, which would end the “spoiler” panic. Let’s talk about why CNN’s attempt to blame and shame independent voters is bogus. https://t.co/iZNjbUJ20a

When Stein tried to explain that Green Party voters would not all have otherwise obediently voted for Clinton and that Democrats “don’t own Green votes” in elections, Burnett was not interested and continued to push the debunked talking point.

You got more votes than Donald Trump’s margin of victory. I don’t care whether you were for the Pink, Blue, and Purple Party.

When a shortened clip of the interview was posted later on Twitter, Stein accused CNN of editing out three minutes during which she discussed “ranked choice voting” — a system whose proponents say would end fear over “spoiler” votes and ensure that the winner had majority support.

Exit polls showed that most people who voted Green wouldn’t have voted if we weren’t on the ballot. With no Greens, HRC might’ve netted 11% of our votes – & still lost MI, PA & WI.
(Cc: @NateSilver538)

Burnett, who maintained a dismissive and patronizing tone throughout the interview, then turned to alleged Russian interference in the 2016 election and cited a Senate Intelligence Committee report which concluded that Russia “tried to help” Stein’s campaign.

That report was authored by the founders of cybersecurity firm New Knowledge, one of whom was exposed by the New York Times in December for creating an army of fake Russian bots and running a false-flag campaign to discredit a Republican candidate for senate in Alabama in 2017 by implying he was helped by Russia on social media.

The “bombshell” report on Russian trolls came from New Knowledge: a Dem-allied firm exposed for election interference by orchestrating an elaborate false flag operation to plant the idea that Russian social media trolls targeted the 2017 US Senate race. https://t.co/0kQxa6oFN9

Burnett shook her head in apparent confusion, however, appearing to know nothing about the New Knowledge scandal, which even led Facebook to remove a page belonging to the company’s CEO Jonathon Morgan for “engaging in coordinated inauthentic behavior” during the Alabama election.

In what seemed like a last-ditch effort to tar Stein for alleged Russia connections, Burnett displayed a now-infamous photograph of Stein attending a 2015 dinner hosted by RT in Moscow at which former Trump adviser Michael Flynn and Russian President Vladimir Putin were also present. While Stein did not hide her trip to Moscow — which she used to discuss diplomacy and peace initiatives —  CNN seemed eager to portray it as something nefarious and secret.

Stein accused those pushing false accusations of Russian involvement in her campaign of “attempting to silence political opposition.”