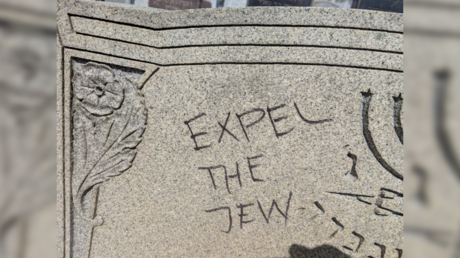 Police in Massachusetts are investigating a suspected hate crime in which some 59 gravestones at a Jewish cemetery were defaced with swastikas and anti-Semitic graffiti including, “Expel the Jew,” and “Heil Hitler.”

Dozens of graves were vandalized at a Jewish cemetery in Fall River some time between Saturday evening and Sunday morning in what has already been described as “an inexcusable act of anti-Semitic hatred.”

“It’s scary because – we know – history has taught us what happens when hate goes unchecked. So, we have a responsibility now to stand up and put a stop to it,” Robert Trestan, regional director of the New England region of the Anti-Defamation League, told NBC News.

The damage, which included some tombstones being knocked to the ground while others were marked with mocking or offensive phrases such as “Oy vey! This is MAGA country,” was discovered by the cemetery groundskeeper.

Also on rt.com
12yo arrested for writing ‘Hail Hitler’ on school playground (PHOTOS)


An anonymous donor is reportedly offering a $12,500 reward in addition to the ADL’s $1,500 and an undisclosed sum offered by the City of Fall River Police Department for information leading to the arrest of the perpetrator. There are currently no suspects in custody.

There were some 177 anti-Semitic incidents reported in Massachusetts in 2017 (the last year for which there are records), according to the New England chapter of the ADL. The figure marks a 42 percent increase of such incidents on the previous year.