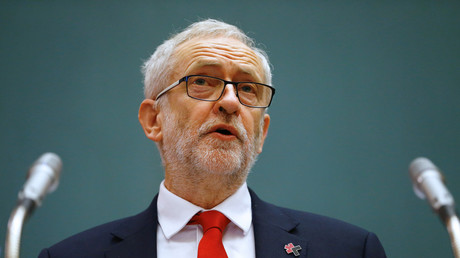 UK Labour leader Jeremy Corbyn was awarded the Sean MacBride Peace Prize along with Noam Chomsky and Japanese anti-military base activists, yet the award received scant coverage in the British media.

The International Peace Bureau presents the Sean MacBride Peace Prize to individuals, organizations or movements for their work for peace, disarmament and human rights.

Corbyn was deemed this year’s recipient, along with renowned scholar Noam Chomsky and the All Okinawa Council Against Henoko New Base. He received his award in Geneva on Friday.

The Labour leader was recognized for his “sustained and powerful political work for disarmament and peace.” His longtime work with the Campaign for Nuclear Disarmament in the UK and the Stop the War Campaign was commended, along with his work for peace as a politician.

Interesting to note IPB’s award of MacBride Peace Prize to Jeremy Corbyn “for his sustained and powerful political work for disarmament and peace” not widely reported in UK. Perhaps inconvenient for national party politics? https://t.co/jB1fiPRY0Y

#BBCNews is it true Jeremy Corbyn won an international peace prize this weekend, just I’m yet to see/hear it on any of your news programs

The UK media may not be reporting @jeremycorbyn‘s honour this week but the Swiss media is.
“British Labour leader Jeremy Corbyn is awarded the Sean MacBride Award by the International Peace Bureau in Geneva”https://t.co/3vmYqQfXRc

“As a member of parliament in the UK he has, for 34 years continually taken that work for justice, peace and disarmament to the political arena both in and outside of Parliament,” the International Peace Bureau said. “He has ceaselessly stood by the principles, which he has held for so long, to ensure true security and well-being for all – for his constituents, for the citizens of the UK and for the people of the world.”

“As leader of the Labour Party and Leader of the Opposition he continues to carry his personal principles into his political life – stating openly that he could not press the nuclear button and arguing strongly for a re-orientation of priorities – to cut military spending and spend instead on health, welfare and education.”

The Japanese All Okinawa Council Against Henoko New Base was recognized for its commitment to close the Futemna Marine Air Base and its opposition to building another military base in Henoko. The group was awarded its prize in Barcelona at the end of November.

Chomsky won for his decades of supporting peace, his anti-imperialism and his criticism of militarist US foreign policy. He will be presented with his award in the US next year.