European Commission President Jean-Claude Juncker has brazenly demanded that all British staff working for the EU be given Belgian citizenship once the UK crashes out of the bloc.

During a debate in the European Parliament on Thursday, Juncker asked Belgian Prime Minister Charles Michel to grant British EU officials citizenship as they face uncertainty over their future post-Brexit.

“Brussels is a warm, welcoming environment and we’re very happy to be here,” Juncker said during a EU parliament debate on Thursday.

“I’d also like the Belgian authorities to apply the same generosity when it comes to extending Belgian citizenship to the British officials here in Brussels – they deserve it. I know that the prime minister is often overflowing with generosity and will hear our wishes.”

Up to 800 Brits working within the EU Commission and an unknown number in other organs of the 27-member state bloc have been left in limbo over what their future will be post-Brexit. 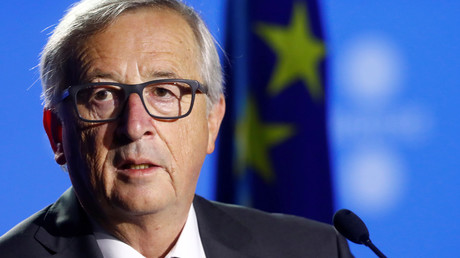 EU citizenship is a precondition of employment for EU staff members, and the EU Commission has until now said “the employment of EU officials of UK nationality may be terminated under the rules of the staff regulations in the event of Brexit.”

British EU staff have previously attempted to gain Belgian citizenship, but failed to do so as they already have a special diplomatic tax status.

During the same debate, former UKIP leader Nigel Farage threw a barb at PM Michel, saying his country is “artificial.”

“Nobody ever dares tell the truth about Belgium: Belgium is not a nation. It’s an artificial creation,” he said, citing the fact that the country has multiple languages, before adding: “We want to live in nation states not artificial creations.”

But Michel hit back: “I should thank Nigel Farage for his good advice on the future of Belgium… He sorted out the future of the UK with Brexit and we see where that’s ended up in the UK.”