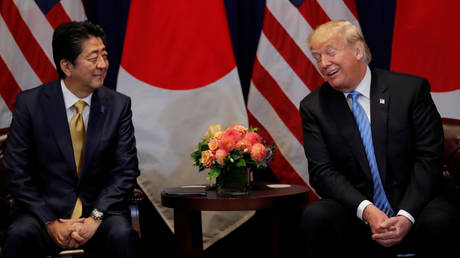 Japanese Prime Minister Shinzo Abe has refused to deny reports that he nominated Donald Trump for the Nobel Peace Prize after being “informally” asked to do so by the White House, in a move that prompted ridicule online.

The Asahi newspaper reported on Sunday that the Trump administration had asked Abe to make the nomination for his work in facilitating talks and easing tensions with North Korea.

“I’m not saying that it is not the fact,” Abe said on Monday, while declining to outright confirm or deny the report. He said that wanted to “refrain from commenting” based on the fact that the Nobel Committee does not disclose nominators for 50 years.

That, however, didn’t stop Trump from blurting out the details to reporters at the White House on Friday, revealing that Abe gave him “the most beautiful copy” of a letter which he sent “to the people who give out a thing called the Nobel Prize.”

Trump’s need to compete with Obama is so weird. Can you imagine shamelessness of asking a foreign leader to nominate you for a prize you have no chance in hell of winning? “The Rock”, even a rock, has a better chance of winning a Nobel Peace Prize. https://t.co/yqdMZ2YJyi

Honestly, how sad is this?

Trump is so narcissistic that he’s made the US Gov’t beg foreign leaders to nominate him for the Nobel Peace Prize. https://t.co/y3VNLYRmPI

During the same press conference, Trump also claimed that former president Barack Obama told him he was thinking about “starting a big war with North Korea” and complained that Obama had received the prestigious prize after being in office “for about 15 seconds” and doing nothing to deserve it. He also said despite being deserving of the award himself, that he probably will “never” win it.

The US president did not mention, however, that his administration had apparently requested the nomination from Abe. According to the Asahi report, the White House had been angling to get the nomination since Trump’s summit with North Korean leader Kim Jong-un in Singapore last summer.

Dear lord how embarrassing. Trump asked the Japanese government to nominate him for the Nobel prize. And then bragged about it, as if he had no idea they would do it. https://t.co/kFNRXC2NOa

It has since emerged that there may have been no need for Abe to nominate him, since he had already been nominated by two Norwegian lawmakers for “positive developments on the Korean Peninsula.”