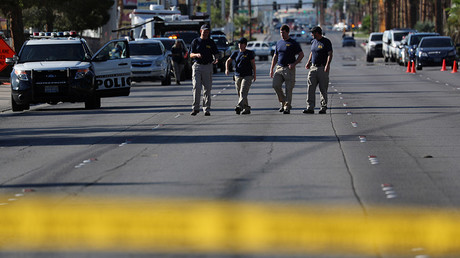 A man in Oklahoma City has been arrested for threatening to carry out a mass shooting in San Antonio, just days after 59 people were killed, and more than 500 others injured, in the Las Vegas shooting massacre.

Roderick Lamar Robinson, 39, who posted the threats on his Facebook page Tuesday night, has been charged with a terrorism hoax under Oklahoma law and faces a charge in Bexar County of making terrorist threats, reports My San Antonio.

READ MORE: Las Vegas gunman’s girlfriend says she had no idea he was ‘planning violence’

Robinson threatened to “kill all” patrons on North Main Avenue, San Antonio, which is reportedly a “hub for the city’s LGBTQ community”.

“It’s war b–ches an [sic] no one is safe on the strip,” wrote Robinson, who goes by Rod Lamar on the social networking site. He went on to threaten that he would do “more than” what happened at the country music festival in Las Vegas – the deadliest gun massacre in modern US history.

More than 300 people had shared the distressing warning by Wednesday morning, most of which were to warn their San Antonian friends to avoid the area.

Robinson later posted an apology to his page, saying that he “regrets” what he said and that there is “nothing to worry about”.

“Nothing to worry about I’m so in love with the San Antonio strip I regret what I said,” he wrote. “Can’t you folks see that I wish I could come back an cry an tell all of you how much I miss you an love you I’m so for real when dreams are broken it makes us say all kinds of things.”