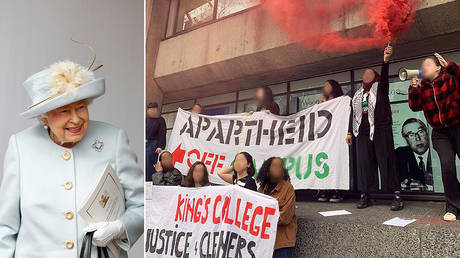 It is ‘outrageous’ that King’s College London (KCL) singled out pro-Palestinian student activists and blocked their access cards ahead of the Queen’s visit to the campus as a ‘security measure,’ one student who was barred told RT.

“I got my ID card. I tapped it on the barrier and it wouldn’t work. The barrier wouldn’t open,” Mehreen, one of the KCL students barred from entering the campus during the Queen’s visit, told RT.

“I tapped [the ID card] about three times… by the third time I knew that this was intentional.”

She, along with several campus groups, now accuses the police and KCL of “profiling” and going after them for staging peaceful pro-Palestinian protests. They had earlier launched a campaign denouncing the college’s ties to Israeli institutions that work with arms companies.

I’m a fee-paying student… and I’m not allowed to go to my lecture because I’m apparently a security threat to the queen? Outrageous.

Mehreen posted a video showing a campus security guard explaining that her access was blocked at the request of the Metropolitan Police. Others also shared videos of their ID cards not working.

It all happened on Tuesday when Queen Elizabeth II, along with the Duchess of Cambridge, arrived at one of London’s oldest universities to open a new building.

The ban reportedly included all campuses, libraries, cafes, and workshops. Some complained that they missed exams because of the restrictions. According to several groups on campus, at least 10 “politically active” students were subjected to the ban. On Wednesday, they held a new protest outside the campus, demanding answers to why the student activists were banned from entering KCL premises.

The explanation Kings’ College gave to RT is that it “had to minimize movement through buildings” because the Queen’s visit required “the highest level of security.”

The Metropolitan Police declined RT’s request to comment on security issues on the campus.