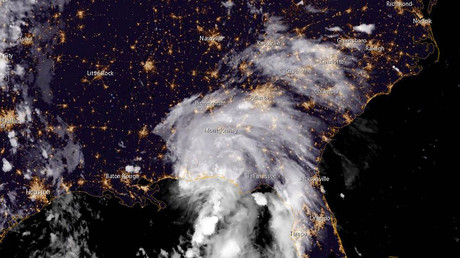 The crew of the International Space Station (ISS) has the best view of many of the Earth’s most magnificent, and often terrifying, weather events. Thankfully, the crew brought its HD cameras along to share with the rest of us.

Cameras outside the ISS recently captured views of Tropical Storm Gordon as it bore down on the Northern Gulf of Mexico at a speed of 15mph (24kph). The unique view from an altitude of 255 miles (410km) up puts the sheer scale of these tropical storms into perspective.

While Tropical Storm Gordon was relatively moderate, it did unfortunately claim the life of a young boy who was hit by a falling tree.

Flash flood alerts have been put in place in parts of Mississippi and Arkansas as the storm has been downgraded to a tropical depression. The National Weather Service has warned that, despite the downgrade, the threat of heavy rains and flooding remains.

The first major hurricane of the year, Florence, is already on the way towards Bermuda and the eastern seaboard of the United States.