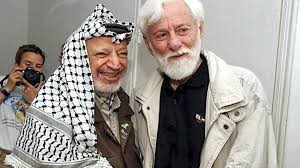 “If you don’t get my weekly column, it means I am dead,” wrote Israeli writer Uri Avnery to a friend.  As I eagerly awaited Uri’s column each week, I feared that each new column might be his last.

And so it finally came to be.  The renowned 94-year old writer and peace advocate finally succumbed to old age after a stroke and massive heart attack.

The roar of the last Lion of Judah had been silenced.

I always considered Avnery as the wisest voice in the Mideast, and Israel’s last prophet.  His voice was always rich in wisdom, morality and common sense.  Few Israelis and even fewer Arabs attained his level of clarity and logic.

Whenever I grew weary writing columns and felt I could no longer go on, I told myself, “if 94-year old Uri can keep writing brilliant columns each week, then you too can keep writing.  Back to your keyboard!”

Uri’s story was in good part that of modern Israel.  He was born Helmut Osterman to a prosperous German Jewish family near Hanover. When Hitler came to power, they migrated in 1933 to Palestine with the 11-year old Helmut – who changed his name to the Hebrew, Uri Avnery.

In 1948, the young Avnery joined the underground Jewish guerilla force Irgun, fighting British and Palestinians and, later, Arab regular soldiers. Irgun committed numerous notorious terrorist acts and massacres that played a key role in driving the Palestinian population from their ancestral homes.  He was seriously wounded and nearly died.

Two years later, he and three friends started a political magazine, “One World.”

Avnery was increasingly political and sided with Israeli expansionists.  But he gradually came to see that peace and…