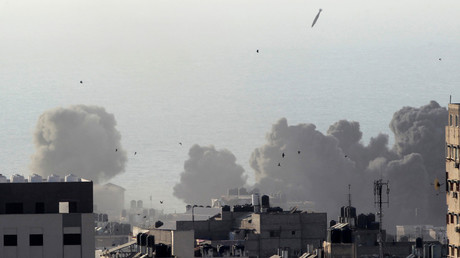 An Israeli Foreign Ministry spokesman left diplomatic niceties aside, heading straight to Twitter to accuse the BBC of lying in a story headlined “Israeli airstrikes ‘kill woman and baby.’”

Emmanuel Nahshon angrily tagged BBC World and informed them that his tweet constituted a “formal complaint by the Israeli Foreign Ministry.”

.@BBCWorld this is a formal complaint by @IsraelMFA .This title is a deliberate misrepresentation of reality ( that’s the polite equivalent of “ this is a LIE”, if you don’t get it). Israelis were targeted by Hamas and IDF acts to protect them.Change it IMMEDIATELY!!! @IsraelMFApic.twitter.com/pqjXuopXgO

Nahshon was angry at what he perceived to be a lack of context because, while the headline used was not strictly false, he was upset that it didn’t explain that Israel’s airstrikes came in response to over 100 rockets being fired into southern Israel from the Gaza strip, injuring a number of civilians.

The BBC caved in to Nahshon’s demand and changed the headline of the story.

The Israeli Foreign Ministry spokesman is on his way to becoming the scourge of nervous headline writers everywhere with his Twitter tirades. He used the same method to hit out at CNN late last month, again demanding that a headline be rewritten.

No @cnni !!! You got it wrong and not for the first time – an Israeli soldier was killed by #Hamas and #IDF retaliated, protecting its country and citizens against murderous terrorists. By misrepresenting the facts you manipulate against #Israel! @cnni– STOP YOUR MANIPULATION !

Nahshon’s main claim, often repeated, is that the Israeli Defense Force only ever strikes in retaliation and to suggest otherwise is a manipulation of the facts.

He told Ynetnews in July that: “We in the Foreign Ministry are on guard 24 hours a day. We would not let international media deliberately distort the events taking place in Israel and in our region. We will respond to every distorted headline and demand its immediate correction.”

When the United Nations overwhelmingly passed a resolution condemning what it called Israel’s “use of any excessive, disproportionate and indiscriminate force” against Palestinians in the Gaza Strip in June, Nahshon was back on Twitter to label the resolution “one-sided” and “anti-Israel.”