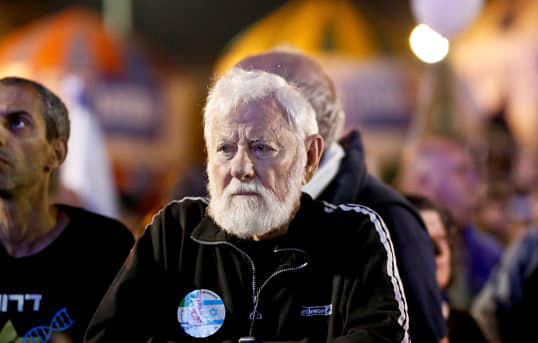 Left-wing peace activist Uri Avnery has been hospitalized in very serious condition after suffering a stroke on Saturday and is said to be unconscious.

Avnery, 94, has written opinion pieces on a regular basis for Haaretz. He is a former Knesset member and a founder of the Gush Shalom peace movement who worked as editor-in-chief of the Haolam Hazeh weekly. He has been an advocate for the past 70 years for the creation of a Palestinian state.

Anat Saragusti, a journalist and human rights activist, who is close to the 94-year-old Avnery, posed a wry comment on Facebook late Wednesday in which she wrote of in part: “It can be assumed that he won’t write his weekly column this week He once told me half-kiddingly and half-seriously: ‘If you don’t receive my column on Friday, you should know that I died.’ So he hasn’t died, but he’s not conscious. In exactly another month, on September 10, he’ll be celebrating his 95 birthday, and an event is already being prepared in his honor at the Tzavta [Theater in Tel Aviv]. I was there today, hoping for the best, fingers crossed.”

Avnery was the first Israeli to meet with PLO leader Yasser Arafat, in Lebanon in 1982.

In the last article that Avnery wrote for Haaretz, which appeared in Hebrew on Tuesday, he was highly critical of the controversial nation-state law that the Knesset passed last month, and argued that the Israeli nation and not the Jewish nation has its home in Israel. He also mentioned that he had once been among the petitioners in an unsuccessful effort before the High Court of Justice to change the nationality notation in his identity card from “Jewish” to “Israeli.”