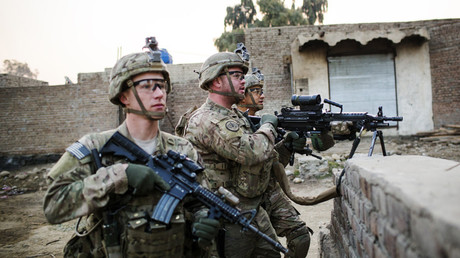 Islamic State terrorists say they have gotten their hands on a variety of US weapons and sensitive radio equipment in Afghanistan following recent battlefield victories. They also posted pictures of documents, photographs and US ID cards online.

The weaponry allegedly belonged to American soldiers, but none were captured in the area at the time, according to the Military Times publication.

The original source of the photographs is Islamic State’s (IS, formerly ISIS/ISIL) Amaq new agency. They were first circulated by the SITE Intelligence Group, which alleged that they had been taken in Nangarhar province.

The photos also include an advanced military radio used by coalition forces, an American flag and personal documents – two ID cards belonging to Spc. Ryan Jay Larson, although it remains unclear how the weapons and papers ended up in IS hands, or even when the photos were originally taken.

The U.S. military command in Kabul said the soldier “has been accounted for and remains in a duty status within his unit,” Reuters reports.

“SPC Larson was attached to a unit conducting a partnered (operation) with Afghan Forces,” US military spokesman Commander Ron Flesvig said in an emailed statement on Sunday, Reuters reports. “The soldier’s I.D. and some of the equipment were left behind after the (operation). The loss of personal identification is unfortunate.”

She offered no further details while the White House also referred the media to the Defense Department.

Nangarhar has become a volatile region of Afghanistan overrun with IS militants – about 1,000-1,500 of them, according to the US. Most are actually believed to be former Taliban who had previously fled Pakistan.

American special operations troops are in the area to help Afghan government troops reclaim territory lost to the terrorists.

Among the weapons are a rocket launcher, machine gun and a number of grenades. There are also plenty of 5.56mm and 7.62mm rifle rounds intended for sniper rifles and M240 machine guns. The list further includes flak jackets, eye goggles, various body padding, tourniquets and other medical supplies.

According to retired Marine Corp officer Fred Galvin, who had served in the province up until 2007, only some of the equipment is standard issue for the US military.

“From the looks of all of this it appears [the perpetrators] may have hit a fixed position,” Galvin told Military Times. “Maybe they ran across an observation post, or a site where guys were sleeping, bedding down. You can’t tell 100 percent. But it does look like someone was caught in a hasty attack. If they knew they were going to be attacked like that, they would have been wearing their body armor.”

Marine Coprs veteran Shawn Snow is worried about the multi-band PRC-148 radio depicted. Much more advanced than the Taliban’s usual choice of walkie-talkie, it is capable of intercepting those more simple devices, and prevent others from snooping.

“It’s one of the most commonly used portable radio systems employed by coalition and NATO forces. If ISIS has captured several of these radios, it would provide them with deadly capabilities,” he said, referring to the radio’s ability to jump frequencies and employ encryption to evade detection.

It is still too early to tell without an official US confirmation of the photos’ authenticity. The weapons could easily have been bought at a local bazaar, given the lengthy US operation in Afghanistan.