Two 15-year-old boys were jailed for life this week for stabbing Hussein Ahmed to death in Harrow last November, just one in a spate of lethal knife crimes to sweep the British capital.

The two boys wept as they were sentenced at the Old Bailey on Monday. Another youth was slashed in the same assault and a third narrowly escaped injury in what prosecutors said was a revenge attack. 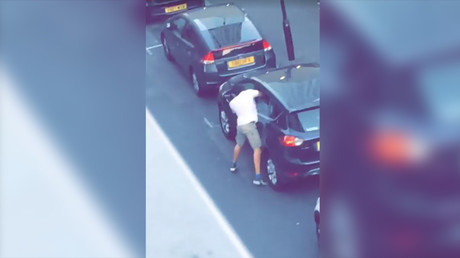 Last week, Office for National Statistics (ONS) figures showed that London has seen a 24 percent rise in bladed attacks. There were a total of 12,021 in 1016 – 2,327 more than the previous year.

Over a two-week period in June, 11 people died as a result of knife attacks. The two youngest victims were just 17 years old.

This is despite efforts by the London Metropolitan Police to clamp down on knife crime.

During a visit to a community centre in Putney in May, Met Commissioner Cressida Dick was told by one resident that even small children are carrying bladed weapons.

“On the housing estate, it’s six-year-olds that are carrying knives, because they think they won’t be stopped. You need to start there, in the primary schools – you need to tell much younger people,” the anonymous resident said.

In rare cases, video footage has been taken of knife incidents by bystanders. In April, two men were filmed grappling over a knife on a London bus.

“I’m an African. You’ll never take my life,” the victim shouts at the assailant as he flees.

It is not known whether the two men knew each other. The victim was left with minor injuries.

“Officers and London Ambulance Service attended and found a man in his 20s with minor lacerations to his hand and head,” a spokesperson for the emergency services said.

“He was taken to an east London hospital where he was treated for his injuries.”

In September last year, a youth was captured on CCTV approaching and threatening a man with a large knife in Shadwell Drive, Northolt.

The attacker can be seen cutting at the victim before fleeing the scene.

Speaking in April, Met Assistant Commissioner Martin Hewitt said the culture of knife carrying needs to be addressed head on.

“Young people carrying knives are doing so for a variety of reasons including status, criminality and self-protection, but only around a quarter are affiliated with gangs.

“There is a phenomenon of people feeling that you need to carry a knife to be safe … The problem comes when you then get a confrontation.”