Foreign Secretary Boris Johnson penned a 4,000-word essay last week outlining his “glorious” vision for Brexit Britain. The Tories responded the only way they know how when it comes to Europe: the Cabinet split. Now rumor has it he’s about to be sacked.

Johnson is no stranger to criticism, and put himself in line for even more, when he returned to the much-debunked claim that leaving the EU means £350 million ($474 million) a week extra for the creaking National Health Service (NHS).

“Once we have settled our accounts, we will take back control of roughly £350 million per week,” he wrote in the Telegraph.

“It would be a fine thing, as many of us have pointed out, if a lot of that money went on the NHS.”

Johnson brushed over the billions that the EU is demanding and insisted the UK should not be paying any money to access the European markets. Apparently, no one told him that the government looks to have agreed that up to £30 billion could be paid over a two-year transition period.

The Foreign Secretary’s comments drew the ire of his bosses in Downing Street, which rebuked Johnson for failing to clear the article with the PM before publishing, just a few days before May is due to give a major speech on Brexit in Florence.

Not for the first time, Cabinet colleagues have accused the Foreign Secretary of placing “personal ambition before the interests of the country,” amid claims by senior Whitehall officials his comments on Brexit would hinder negotiating efforts by the Department for Exiting the European Union (DExEU).

They said he was more interested in fulfilling “discredited promises of the Leave campaign” than delivering the best Brexit for Britain. Commentators called Johnson’s article a “warning shot,” as he believes he has been sidelined in the Brexit debate so far.

Home Secretary Amber Rudd launched the most scathing attack on Johnson, who she accused of “backseat driving.”

“I don’t want him managing the Brexit process. What we’ve got is Theresa May managing that process. She’s driving the car off… Yeah, you could call it backseat driving.” 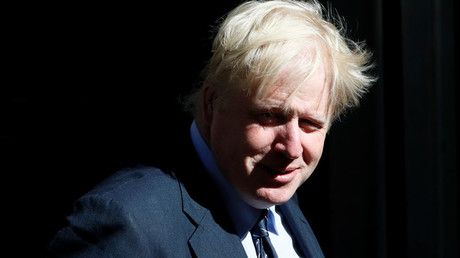 She also backed claims by Scottish Conservative leader Ruth Davidson, who hit out at Johnson for publishing the article on the very same day the UK was hit by its fifth terrorist attack of 2017 at Parson Green.

Asked if she had read Johnson’s article, Rudd she was “too busy” trying to keep people in Britain safe after the explosion in Fulham.

The time appears ripe for the PM to rid herself of her turbulent Foreign Secretary.

But de facto deputy Prime Minister Damian Green dismissed suggestions the Foreign Secretary would be sacked over his comments. He told Sky News on Sunday, “like the rest of the cabinet, like the prime minister, it is all about wanting to get the best deal for the British people.”

Liberal Democrat leader Sir Vince Cable said: “It’s like a school that’s completely out of control and the head teacher is sitting in her office paralyzed and impotent.

“It is complete and absolute loss of authority and the Prime Minister on Monday morning should fire this guy, otherwise her own credibility is reduced to zero.”