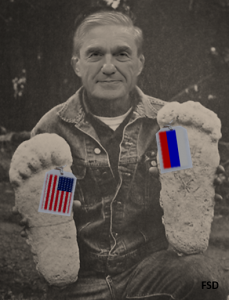 In an astonishing and defining moment both for cryptozoology and the Russian Collusion narrative, Independent Counsel Robert Mueller revealed today that massive hominid footprints discovered outside both Trump Tower and the Kremlin originate from the same primate species, if not the same individual.

Posing proudly with plaster casts, Mueller sketched out his theory for a rapt group of journalists as well as some CNN folks with microphones:

“It all fell in place for us one 3 am after a few beers. Bigfoot appears to have served as a missing-link emissary species, carrying collusion directives from the Kremlin to the Trump Campaign.”

Has Bigfoot been deposed?

“No. But we will be presenting blurry pictures at a later date.”

Is Putin directly implicated in this scheme?

“We have always operated from the premise that Putin is omnipotent. So yes.”

What about the recent revelations that your Russian troll indictment was lifted, whole-cloth, from a 2015 Radio Free Europe Ukranian article? Are in-house plagiarism indictments forthcoming?

“It’s DOJ’s policy never to comment on ongoing witch hunts. What I can say is that we will continue to move in a dogged and determined fashion to confirm all our original suspicions until justice fully serves our unquenchable drive for power.”

Do you have any comment on President Trump’s latest tweets and do you plan to explore his “400 pound genius sitting in bed and playing with his computer” theory?