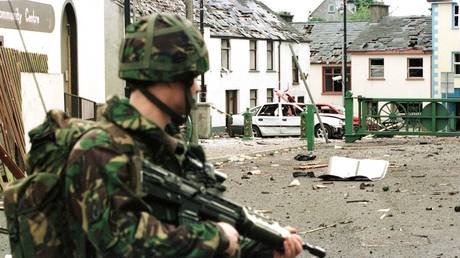 A string of Irish and Northern Irish politicians have urged Karen Bradley, the Northern Ireland secretary, to quit after she claimed that killings committed by British soldiers and police during the Troubles were “not crimes.”

Both nationalist and unionist politicians from the island of Ireland have been united in their condemnation of Bradley’s remarks. Dr James Reilly, an Irish senator and former deputy leader of the Fine Gael party – now led by Republic of Ireland’s PM Leo Varadkar – has cast doubt on whether she could ever “regain the trust” of the families who suffered through the Troubles.


During Northern Ireland questions in parliament on Wednesday, Bradley initially told MPs that over 90 percent of the killings during those years were carried out by terrorists, insisting that “every single one of those was a crime.”

Bradley went on to argue that “The under 10% that were at the hands of the military and police were not crimes,” and were merely fulfilling their duties in an “appropriate way.”

The secretary of state for Northern Ireland apologized on Thursday for making the incendiary comments, saying they were “misguided and ill-judged.”


The Troubles claimed around 3,500 lives on both sides from the 1960s until 1998, when thesecuring of the Good Friday Agreement brought an end to decades of major conflict.