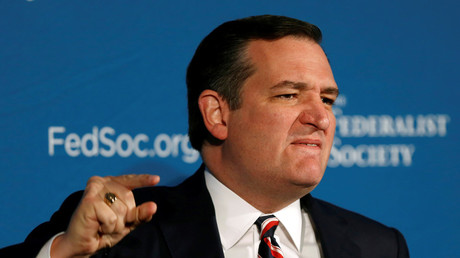 The tweet featured a booking photo of a bleary-eyed O’Rourke, from the time of his arrest for driving while intoxicated in 1998, with the text “Sorry, Can’t debate. Had a little too much to drink.”

Cruz, known as a shrewd debater, had challenged O’Rourke to a series of five verbal duels, with the first due to take place in Dallas this Friday. O’Rourke said that the Friday date was “not going to happen,” but promised to go head-to-head with Cruz before the election.

The GOP roasted O’Rourke in response, posting a picture of the candidate holding a skateboard with a caption: “Sorry, I’m going to have to skate on the debate Friday.” The party also dug up a ‘blunder years’ picture of O’Rourke from his days playing with punk band Foss in the 1990s, in which he poses in grungy black garb.

Democrats and liberals panned the GOP tweets, in particular their making fun of O’Rourke’s punk rock days. “This is easily the best 18-25 demo-targeted ad *for* O’Rourke’s campaign I’ve seen so far,” said one.

Wait, Texas GOP thinks that showing a photo of @BetoORourke in his band from years ago is going to be negative for him?

This is easily the best 18-25 demo-targeted ad *for* O’Rourke’s campaign I’ve seen so far.

“Look at how cool the Democratic candidate was when he was young,” is such an objectively bad strategy you have to wonder how terrible the other options were https://t.co/cSik1NYEAt

The Republican party held its ground however, and served up some fresh smack-talk in retort.

“Based on the reaction to our tweets we can confirm that Beto is in fact going to receive 100% of the vote from Buzzfeed contributors, out of state liberals, and people who use the word ‘rad.’ We feel very owned,” the party tweeted on Wednesday.

Based on the reaction to our tweets we can confirm that Beto is in fact going to receive 100% of the vote from Buzzfeed contributors, out of state liberals, and people who use the word “rad.” We feel very owned :'(

O’Rourke is duking it out with the incumbent Republican Cruz in a bid to take over his Senate seat this November. Cruz currently holds the narrowest of leads on O’Rourke, with just one point between the two candidates in a poll taken this week.

The Texas representative has spoken candidly about his DWI charge, and about an earlier burglary charge he received after jumping a fence at the University of Texas at El Paso in 1995. He was not convicted of either charge.

“Both incidents were due to poor judgement and I have no excuse for my behavior then,” he told the Palestine Herald-Press in 2017. “However, since then, I have used my opportunities to serve my community and my state. I’m grateful for the second chance and believe that we all deserve second chances.”