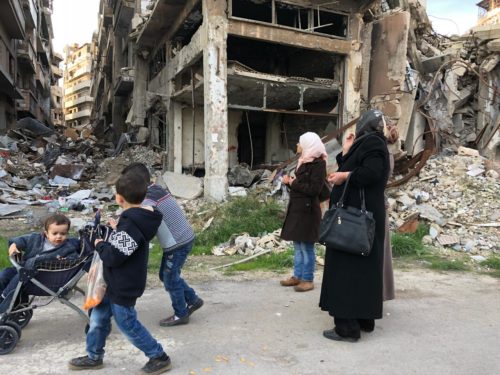 Yes, there is rubble, in fact, total destruction, in some of the neighborhoods of Homs, Aleppo, in the outskirts of Damascus, and elsewhere.

Yes, there are terrorists and ‘foreign forces’ in Idlib and in several smaller pockets in some parts of the country.

Yes, hundreds of thousands of people lost their lives and millions are either in exile, or internally displaced.

But the country of Syria is standing tall. It did not crumble like Libya or Iraq did. It never surrendered. It never even considered surrender as an option. It went through total agony, through fire and unimaginable pain, but in the end, it won. It almost won. And the victory will, most likely, be final in 2019.

Despite its relatively small size, it did not win like a ‘small nation’, fighting guerilla warfare. It is winning like a big, strong state: it fought proudly, frontally, openly, against all odds. It confronted the invaders with tremendous courage and strength, in the name of justice and freedom.

Syria is winning, because the only alternative would be slavery and subservience, and that is not in the lexicon of the people here. The Syrian people won because they had to win, or face the inevitable demise of their country and collapse of their dream of a Pan-Arab homeland.

Syria is winning, and hopefully, nothing here in the Middle East, will be the same again. The long decades of humiliation of the Arabs are over. Now everyone ‘in the…