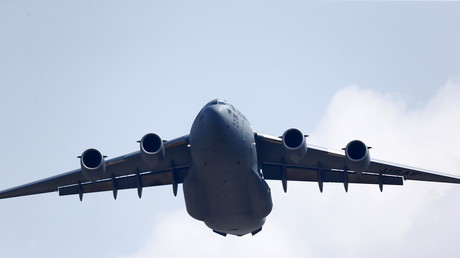 On the 65th anniversary of the Korean War, Pyongyang has handed over the remains of dozens of US soldiers who died during the three-year-long conflict, the White House has confirmed.

A US Air Force C-17 transport plane picked up the remains of American servicemen in Wonsan, North Korea on Friday morning, before delivering them to the Osan Air Base in South Korea, the White House’s statement reported.

READ MORE: US sends caskets to N. Korea in preparation for return of US war dead

While the number of corpses has not been disclosed, earlier reports indicated that Pyongyang was going to hand over the remains of roughly 55 persons. Before a formal repatriation ceremony on August 1, the Defense POW/MIA Accounting Agency will check the remains, before sending samples for forensic identification.

Thousands of soldiers from the US air base and their families are lining the route to welcome the fallen soldiers home. Over 5000 US soldiers remain unaccounted for in North Korea after the war. The remains will be tested to check they are Americans. pic.twitter.com/SskSWIHKxO

The return of the remains is mainly symbolic, as over 5,300 US personnel never returned home from the conflict. But the North Korean move was welcomed by the White House as a token of the trust behind the understanding made at the Singapore summit last month. President Donald Trump and North Korean leader Kim Jong-un met in the Asian for a first ever face-to-face between heads of the two states.

“Today, the Chairman is fulfilling part of the commitment he made to the President to return our fallen American service members,” White House press secretary Sarah Sanders said in a statement. “We are encouraged by North Korea’s actions and the momentum for positive change.”

The US and its allies intervened in Korea’s civil war under a UN aegis, preventing the communist north from securing the entire peninsula. The foreign troops helped turn the tide, but later “volunteer troops” from China propped up the northern side, drawing the conflict to a stalemate. Technically, the war still continues, as no formal peace declaration was signed.