It’s frustrating that whereas all human beings wish to live meaningful lives, we seem helpless in the face of a few individuals waging wars and exploiting our world.

But we can each do something about this insensible status quo, as ordinary folk of the People’s Peace Movement ( PPM) show us by taking one barefoot-step at a time, traveling to the Northern areas of Afghanistan to persuade fellow Afghans, whether they’re with ‘insurgent groups’ or with the U.S./NATO/Afghan forces, to stop fighting. 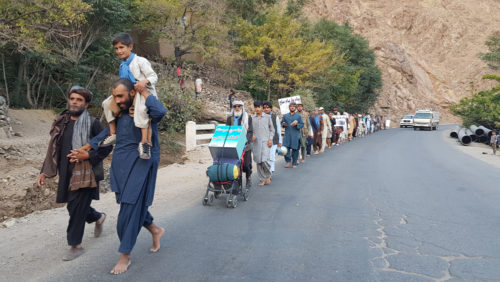 The People’s Peace Movement (PPM) walking barefoot to the Northern provinces of Afghanistan, led by a blind member of their group, Zindani (Photo taken from PPM’s Facebook Page)

Their action of walking without shoes suggest to us that, for us to survive today’s militarized and profit-driven norms, we have to live each day differently, and with clarity and compassion.

We need to think anew.

Moreover, the roots of ‘terrorism’ lie within ourselves. We are our own source of wars.

Iqbal Khyber, a representative of PPM, told the Afghan Peace Volunteers (APVs) about how violence has taken root in all of us. “A blind member of our group, Zindani (a name he gave himself after he was blinded by a Taliban-planted roadside bomb, meaning ‘imprisoned’ )…