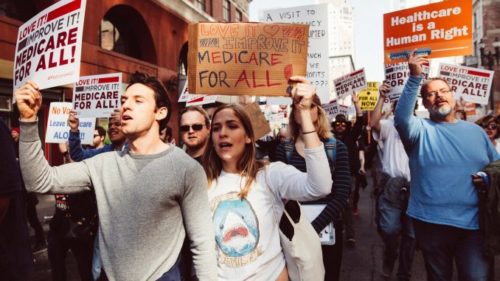 Medicare for all has had majority support in the United States for more than a decade. As more people become aware of the details, support is growing. An August 23rd poll, conducted by Reuters/Ipsos, found 70% of the public now supports Medicare for all. We see the potential for winning National Improved Medicare for All in the early 2020s if people continue to build the movement necessary to demand it.

Support Moves From Majority to Super-Majority, On the Way to National Consensus

This widespread support is occurring because health care is in a crisis in the United States that touches every family. A growing majority of doctors and medical students are urging Medicare for all because they are experiencing the negative impacts of a health insurance-dominated healthcare.

There is a large enough percentage of the population who understands the issue sufficiently that they are educating others about it. People know that national improved Medicare for all is a publicly-financed, privately-delivered system in which all people are enrolled and all medically necessary services are covered.

As a result of this spreading understanding, despite the media failing to tell the truth about Medicare for all, health profiteers lying about it and big business interests doing their best to stop progress toward a national consensus, people are not falling for the misinformation campaign. Efforts to mislead the public, as coverage of a recent