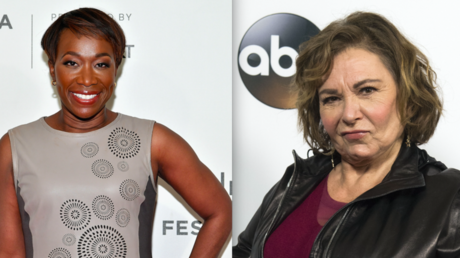 It seems hateful and bigoted comments get you in trouble only if you’re a conservative. That’s the message many have taken from the firing of controversial actress Roseanne Barr yesterday.

Liberals were outraged when Barr tweeted that former advisor to Barack Obama Valerie Jarrett — who is black and was born in Iran — looked like a combination of the “Muslim brotherhood & planet of the apes.”

ABC subsequently cancelled its reboot of the hit ‘Roseanne’ sitcom, calling her comments “abhorrent, repugnant and inconsistent with our values.” Barr apologized and said she had been affected by the sleeping aid Ambien when she wrote the tweet.

But only a few weeks ago, when liberal MSNBC host Joy Reid was embroiled in a similar scandal after a second round of anti-gay and anti-Muslim blog posts authored by her were unearthed, liberals jumped to her defense.

Not only did Reid make multiple hateful comments about gay people and Muslims over a sustained period, she then lied about it and said she was hacked — an excuse no-one believed and which technical experts ruled out as very unlikely. While Reid apologized for some of her previous writings, she denied responsibility for others and it all went away without any repercussions.

Reid’s apology seems to have been worth more than Barr’s, however — since Barr’s show was cancelled and Reid continues to host her show on MSNBC and enjoy wide praise from liberals.

Conservatives on Twitter were quick to point out the hypocrisy and double standard.

Joy Ann Reid repeatedly and intentionally published bigoted ideas over long periods of time, lies about it, gets help covering it up, fake apologizes, and is heralded as a hero and keeps her show

Roseanne tweets something racist, immediately apologizes, and loses her show

Roseanne made some racist comments, apologized for it and her show was taken off the air.

Joy Behar, Joy Reid and Jimmy Kimmel make racist comments, constantly attack this administration for their beliefs in god and yet they still have a platform with no recourse. LIBERAL BIAS!

It must be exhausting being a centrist liberal: in particular, having to remember why last week Joy Ann Reid shouldn’t be sacked for the very same things Roseanne needs to be sacked for today.

Liberals: Roseanne Barr is a vile racist bigot and she needs to be dismissed for her racist tweet.

Also liberals: Joy Ann Reid was a victim of a Russian hacking campaign and her multiple bigoted blog posts demonstrate why she should keep her job.

To add insult to injury, MSNBC aired a panel discussion during which host Andrea Mitchell asked Reid about her opinion on Barr’s racist comment —  ironically asking her what a person had to do on social media to end up getting fired.

This is INSANE. Joy Reid (yes, the same Joy Reid that made homophobic comments, blamed a hacker, and was never fired) is sitting on a panel with Valerie Jarrett discussing Roseanne Barr’s comments that got her ABC show cancelled. pic.twitter.com/g5jmyB59HK

Some suggested that Barr should have claimed her Twitter had been hacked, since it worked well for Reid.

Incidentally, I would have advised Roseanne to say her account was hacked. It works for Godless liberals like Joy Reid, who still has her job.

While what she posted was wrong, I wonder if Roseanne Barr would still be employed if she had said her account was hacked.

That same tactic worked out well for Joy Reid after posting anti-Muslim and homophobic tweets. 🤔

Others pointed out that Barr had already been known for making racist comments in the past and questioned why there was suddenly so much outrage surrounding one tweet.

In 2015, I muted Roseanne because she wouldn’t stop tweeting the most vile and overt bigotry about Muslims and Arabs at me in the context of Israel (not vague racism but overt). She deleted many old tweets but these remnants remain. Everyone at ABC knew what she is for years: pic.twitter.com/KEQhYWHb1a