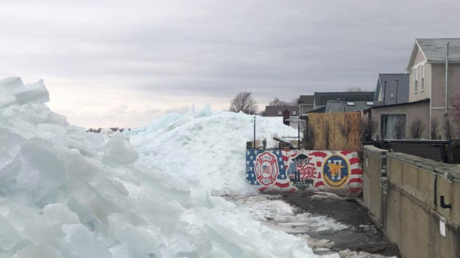 High winds haranguing the eastern seaboard of the US are also launching vast sheets of ice off the Niagara River onto dry land in what has been dubbed an ‘ice tsunami,’ much to the consternation of local residents.

Wind speeds of up to 75 mph, hurricane strength, have damaged power lines and felled trees in some parts of the Great Lakes region, including both the Canadian and US sides of Niagara Falls.

Residents of Hoover Beach were asked to voluntarily evacuate as a precaution ahead of the potential onslaught of an ‘ice tsunami,’ a phrase which may not feature in most local emergency preparedness meetings. Ice tsunamis are formally referred to as “ice shoves, ice pushes, or ivu” and have been studied throughout the last century.

They typically occur in early spring as the ice sheets weaken and begin to break up, as seen along the shores of the Great Lakes. Ice shoves measuring up to 16 feet tall were recorded along Alaska’s Chuck Sea in 2001.


“Instead of ruining a house by flood damage, [the ice] can bulldoze over structures.”

Up to 100 million people were subjected to wind advisories along the Great Lakes region in recent days thanks to the same system that created snow in parts of Arizona and even in Las Vegas.