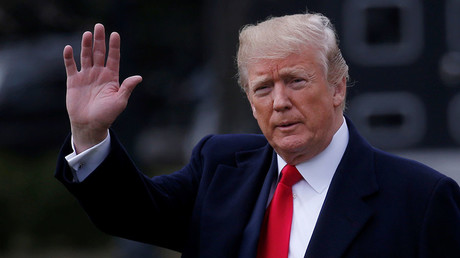 “Yes. I would like to,” Trump said on Thursday when asked about an interview with Mueller during an event on trade.

The president’s pronouncement comes after the sudden resignation of John Dowd, his top lawyer who was leading Trump’s handling of the Mueller probe. Dowd had opposed Trump’s desire to be interviewed by Mueller.

Despite denouncing the investigation as a “witch hunt,” Trump had previously said that he would like to testify under oath. “I’m looking forward to it,” Trump told the press in January. “I would do it under oath,” he also reportedly vowed.

Trump has consistently denied any collusion with Russia.

The House Intelligence Committee voted on Thursday to formally end its Russia probe, after lawmakers found no evidence of collusion between Trump associates and Russia.