US President Donald Trump has defended the actions of his former national security adviser Michael Flynn, saying they were “lawful.” He added, however, that he fired Flynn because he lied to the Vice President and the FBI.

“I had to fire General Flynn because he lied to the Vice President and the FBI. He has pled guilty to those lies. It is a shame because his actions during the transition were lawful. There was nothing to hide!” Trump said in a tweet. 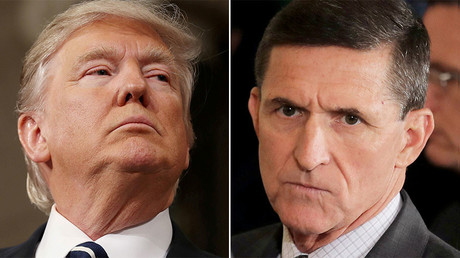 Earlier on Saturday, Trump also told reporters that his election campaign was not engaged in any collusion with Russia. He made his comment after Flynn pleaded guilty to lying to the FBI about a phone call he had with the former Russian ambassador. At that time, Trump, however, did not give any definitive answer to the question of whether he would stand by his former advisor.

At issue was the phone call between Flynn and then-Russian Ambassador Sergey Kislyak at the end of December 2016, after the outgoing president, Barack Obama, ordered a number of Russian diplomats to leave the US and closed two Russian diplomatic properties. Flynn reportedly asked Moscow to restrain its reaction to anti-Russian sanctions at that time, but later told FBI that he did not do that.

US intelligence services listened in on the phone call. Information about it was leaked to the media in January, after Trump’s inauguration. Flynn resigned in February, less than a month into Trump’s term of office.

Flynn’s plea came as part of an investigation into the alleged collusion between the Trump campaign and Russia ahead of the 2016 presidential elections led by Special Counsel Robert Mueller. However, a year after the vote, the inquiry still is unable to provide any solid evidence of any interference in the electoral process by Moscow. Instead, the investigators have so far managed to catch two lobbyists with ties to Ukraine.