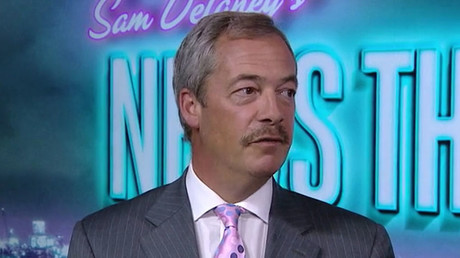 In an interview with RT UK, outgoing UKIP leader Nigel Farage denied that his Brexit campaign contributed to the rising tensions that have followed the UK’s decision earlier this summer to leave the EU.

“Do I feel responsible for people saying extreme things? Quite the reverse,” said the politician, after News Thing host Sam Delaney noted that recorded incidents of abuse have risen since June’s vote. “I almost single-handedly destroyed the far right in British politics; that’s not a bad achievement.”

“We had a far right party, the BNP, that was genuinely anti-Jews, anti-black, and I came along and said to their voters, ‘If you are holding your nose, and voting for this party as a protest – don’t. Come and vote for me; I am not against anybody; I just want us to start putting British people first.’”

As well as transforming the UK’s political landscape, Farage insisted that his followers have been misrepresented, with most media blaming them for the recent uptick in hate crimes.

Nigel Farage also rejected as “ludicrous” long-standing accusations that he himself had been a far-right sympathizer while a schoolboy at Dulwich College, as illustrated by an incident where he supposedly marched through town singing Nazi songs.

“Did I at times wind people up and take the p**s a bit? Yes,” admitted Farage, who said that his “leftie” teachers were outraged by his professed views.

Farage revealed that he was, in actual fact, enamored with both Margaret Thatcher and the controversial anti-immigrant Conservative politician Enoch Powell when he was a teenager.

Farage, who led UKIP for two stints beginning in 2006, called his favored successor Steven Woolfe a “silly boy” who “made a mess of it” when he failed to submit his leadership bid application in time last month.

“I like Steven Woolfe. He would have been great – of all the people who could have succeeded me, he would have been the best,” said Farage. “Great backstory, comes from the Moss Side [a deprived neighborhood in Manchester], council estate, quarter Jamaican, did well, became a barrister, made money – there is a little bit of stardust about Steven.”

A tanned Farage, sporting a luxuriant moustache that has become a viral phenomenon, has not specified what he plans to do after taking a break from politics, but said that he would not endorse any other candidate, or involve himself with other UKIP affairs.

“I am not going to interfere. I am the retiring party leader – let them sort it out… I’ve given 25 years to this party, that’s enough.”