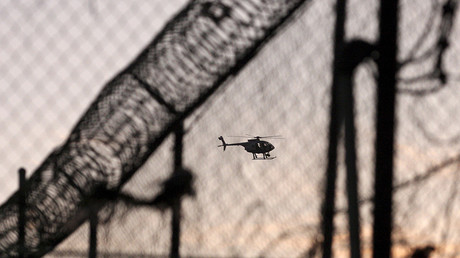 A riot has reportedly occurred at a state prison in western Kansas. Local law enforcement agencies are on the scene, saying that the situation in the facility is under control.

“Huge riot broken out at Norton Correctional Facility. Buildings are burning and some inmates have gotten weapons,” the Kansas Organization of State Employees tweeted.

Huge riot broken out at Norton Correctional Facility. Buildings are burning and some inmates have gotten weapons. #ksleg@APjdhanna

The Norton prison housed 848 inmates as of Friday, with another 125 at a satellite unit to the east in Stockton, according to AP. Most of the inmates are either “low-medium security” inmates or minimum-security inmates.

The Kansas Department of Corrections said an “inmate disturbance” occurred at the facility at around 9.30 pm Tuesday evening, adding that no injuries were reported at the time.

Samir Arif, spokesman for the Kansas Department of Corrections, told The Kansas City Star that multiple agencies –including a local fire department – were responding to the incident at the prison.

“All I can tell you is there’s a situation,” Arif said.

The Norton County Sheriff’s Office says people in Norton are advised to lock their homes and vehicles and remain inside due to the incident at the prison, according to KWCH.

About three hours after the trouble started, Arif told KAKE News that all inmates were back in their cells, with the situation under control early Wednesday.