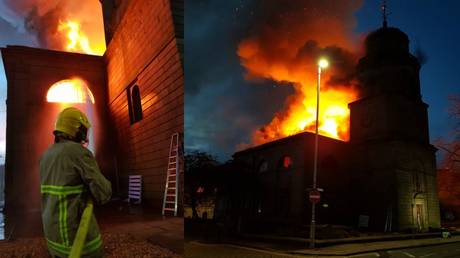 A huge fire has engulfed a historic church in the center of Blackburn in the northwest of England, turning the oldest building in the city into a large inferno.

The blaze started early on Wednesday morning and quickly spread through the whole building. The cause of the fire is unknown and firefighters are on the scene with eight vehicles and two helicopters helping to fight the blaze.

Footage captured of the fire show thick clouds of smoke rising into the sky, with one witness describing how they could hear the sounds of things “exploding” as well.

Peter Howell-Jones, who serves as the dean of Blackburn Cathedral, tweeted that the fire was “very sad to see” and that he was “praying that no one was hurt.”

First opened in 1789, the building formerly housed the Church of St. John the Evangelist, with services finishing there in 1975. It now serves as the Bureau Center for the Arts.

At 5.22am today firefighters were called to a fire at the former St John’s church Blackburn. No casualties, cause under investigation. pic.twitter.com/SD5tsccnIF