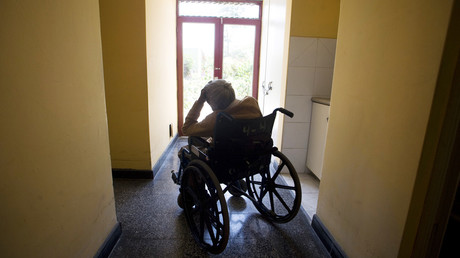 Thousands of nursing home patients across the US regularly receive strong antipsychotics, without being properly diagnosed or even informed of the side-effects, to make life easier for overworked staff, a rights monitor has found.

The latest report by Human Rights Watch (HRW), published Monday, sheds light on disturbing practices thriving in US nursing homes, where thousands of residents are routinely doped up. Every week, more than 179,000 people, mostly the elderly living with dementia, become victims of poor practice, according to the study, titled “‘They Want Docile’: How Nursing Homes in the United States Overmedicate People with Dementia.”

“The problem here is that medications are being used not to treat a medical condition, but to control the behavior of residents who are considered difficult to control,” acting director of the Health and Human Rights Division at HRW, Diederik Lohman, told RT. Instead of investigating the cause of the ‘difficult’ behavior, staff are often “very quick to start prescribing medications which have a strong sedative effect.” They are “basically drugging people into a state when they are constantly sedated,” Lohman said, calling it “an abuse of practice and it needs to stop.”

“It basically facilitates life for nursing home staff,” Lohman says. Caretakers often find drugs necessary “in order for them to do their work.”

What is more unsettling is that personnel usually don’t inform individuals or their families. “It takes less time, it’s more convenient for the staff to just administer these medications rather than to go through the whole explanatory process” about the risks, potential benefits or the alternatives to the treatment.

“Even the FDA (Food and Drug Administration) has noted that when you give [antipsychotic drugs] to someone with a dementia, you have two times higher chance of death,” Executive Director at the California Advocates for Nursing Home Reform Patricia McGinnis, who contributed to the HRW report, warns.

“It can cause people to become zombies. Antipsychotic drugs can cause death, can cause heart palpitations, heart issues with people,” McGinnis goes on. “There is always something new. What are we going to give people to shut them up and to stop them from wandering,” she adds, noting that overmedication has been a common practice for decades. “It’s easier to take care of zombies than of alert people.”

Although the government “actually put in place good regulations” on the use of antipsychotic drugs, Lohman says, their enforcement is “sorely lacking” due to a “strong lobbying arm” and “pressure on the administration.” According to HRW, the government inspectors found 7,038 deficiencies in nursing facilities between 2014 and mid-2017. However, these violations led to no penalties, as having caused “no actual harm.”

But in actual fact “there is a great harm, these drugs can build up over period of time in somebody who’s older and they can cause really disastrous side-effects,” McGinnis objects. “Without an enforcement system,” she adds, there are “‘black box’ warnings on some of these drugs that say ‘these are not to be used for people with dementia.’” Still, the medications, designed to treat conditions, such as schizophrenia, are widely misused.

For the government to reduce the number of abuses, it needs “a better enforcement system,” and needs to address severe understaffing at many nursing facilities. According to HRW, there were nearly 1.1 million residents aged 65 and older living in 15,600 nursing homes across the US.