Those were the times… 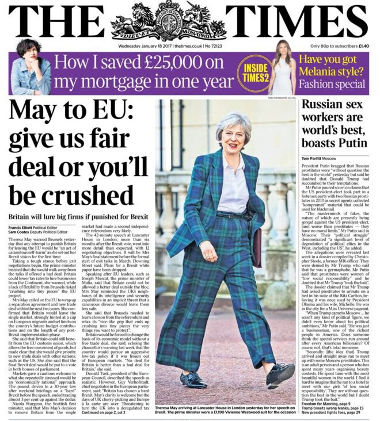 The Times page 1 is of January 18, 2017. Negotiations between the United Kingdom and the European Union about Brexit were just beginning. The “you’ll be crushed” arrogance in the headline characterizes the attitude the British government under May demonstrated during the talks.

Recently that attitude has somewhat changed. This screenshot was taken about an hour ago: 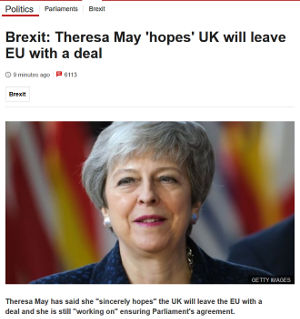 Theresa May has said she “sincerely hopes” the UK will leave the EU with a deal and she is still “working on” ensuring Parliament’s agreement.Arriving in Brussels, she said that she had “personal regret” over her request to delay Brexit, but said it will allow time for MPs to make a “final choice”.

At the EU summit the PM spoke to the other 27 leaders to try to get their backing for a delay beyond 29 March.

BBC Brussels correspondent Adam Fleming said Mrs May spoke to EU leaders for 90 minutes and was asked several times what her contingency plans were if she lost the third “meaningful vote” on her deal in Parliament.

French President Emmanuel Macron has warned that if MPs vote down Mrs May’s EU withdrawal agreement next week, the UK will leave without a deal.

May asked the EU to move the hard coded March 29 Brexit date to June 30. She may be given May 23, the day of EU elections, as a compromise but only if her deal passes the British parliament.

A no-deal crash out on March 29 would create utter chaos for months. It would be catastrophic for Britain’s economy.

May’s withdrawal agreement was already voted down twice. If it comes…