In Gold Warriors, by Sterling and Peggy Seagrave, the authors reveal one of the most shocking secrets of the 20th century. It is the story of the vast treasure Japan managed to loot across Asia, today worth billions or even trillions of dollars, the concealment of it in hundreds of sites, and the secret recovery of much of it by what would become America’s Central intelligence Agency. America helped Japan cover up this vast fortune, fooling the world into believing Japan was bankrupt after the war and was unable to pay reparations for their mass murder and material damage. 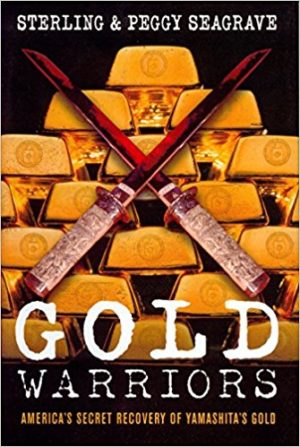 Most of Japan’s vast stolen fortune would remain in the hands of imperialist war criminals, and would for decades be used to prop up Japan’s corrupt one party democracy ruled by the Liberal Democratic Party, with the CIA and the Yakuza pulling the strings behind the scenes. It would be controlled by men like Allen Dulles and John J. McCloy through their Black Eagle Trust, which managed both Japanese and Nazi War loot. The Gold would be deposited in the Federal Reserve, the Bank of England, Union Banque Suisse (UBS) in Switzerland, Citibank, HSBC and other major banks who often stole it for themselves.  The gold was also used to manipulate the global economy, finance assassinations and covert ops, bribe politicians, and finance right wing political movements like the John Birch Society domestically.