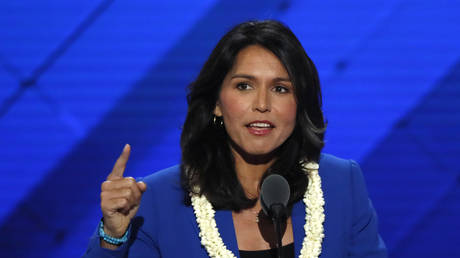 Tulsi Gabbard has slammed the US for allowing firms to sell Saudi Arabia nuclear tech despite its history of exporting extremism which inspires Islamic State (IS, formerly ISIS) and Al-Qaeda, which she says the Kingdom supports.

The Hawaiian congresswoman and Democratic presidential candidate took aim at the Kingdom’s history of extremism in a Twitter video that criticized Energy Secretary Rick Perry’s secret authorizations, to six US companies, allowing for the sale of nuclear power technology and assistance to Saudi Arabia, as Reuters revealed last week. Gabbard said the move is “both mind-blowing and inexplicable.”

President Trump’s recent decision to allow U.S. companies to sell Saudi Arabia nuclear technology is both mind-blowing and inexplicable. How does it serve our interests to help Saudi Arabia develop nuclear weapons? pic.twitter.com/6x0KfajaCc

Saudi Arabia is the “primary exporter of jihadist ideology, Wahhabi Salafist ideology that is the motivation and inspiration for terrorist groups like ISIS and al Qaeda – groups that the Saudis both directly and indirectly support,” Gabbard said.

The kingdom has been tied to Al-Qaeda and extremism in the past, with 15 of the 19 9/11 hijackers coming from Saudi Arabia, according to the CIA. In 2015, one of the alleged hijackers, Zacarias Moussaoui, claimed several members of the Saudi royal family had been listed as Al-Qaeda donors in the database he worked on under orders of Osama bin Laden, US media reported.

Also on rt.com
UN rights body calls out Saudi Arabia over jailed activists & Khashoggi case… but what about Yemen?


WikiLeaks cables from the US State Department from 2009 revealed“donors in Saudi Arabia constitute the most significant source of funding to Sunni terrorist groups worldwide.” In a 2014 email, published by WikiLeaks, then-Secretary of State Hillary Clinton said Saudi Arabia was “providing clandestine financial and logistic support to ISIL and other radical Sunni groups in the region.” It has also supplied weapons to IS in Syria.

Saudi Arabia is reportedly planning to create at least two nuclear power plants, but many are concerned that’s a precursor to developing nuclear weapons, which would further destabilize the region. It was also reported, last year, that Israel was selling Saudi Arabia nuclear secrets.