Can Canada continue to commit what is an enumerated act of genocide by the UNGC [United Nations Genocide Convention] and excuse itself by continuing to say that it is not intending what the Genocide Treaty recognizes as the result of such an act… ?

Genocide is a heinous crime that fractures and dehumanizes humanity. Science tells us that we are all taxonomically Homo sapiens. Yet most of us tend to divide into Us and Them groupings, sometimes leading to in-group and out-group competition that can turn violent. In the worst cases, the monstrous result is the decimation of the different group.

The carrying out of a genocide doesn’t require annihilatory bombing or the mowing down of a particular targetted group. Neither does genocide require a lightning temporality in execution. Genocide merely requires the intent to bring about the destruction of a targetted group by whatever manner, unbounded by a specific timeframe. Humans steer genocide: a malicious force capable of an evil genius in linguistically guising its execution, as well as being capable of extreme patience in achieving its pernicious aims. 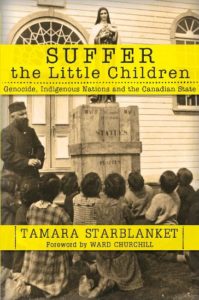 A particular example of an under-the-radar genocide is that carried out by European settler-colonialists who denationalized all the Original Nations of the western hemisphere. There are non-indigenous people who are aware and acknowledge that genocide occurred, but few would realize or acknowledge that the genocide continues. That is much of…