Transparency in politics is usually seen as a crucial element to a functioning democracy, but the flip side to that openness and accountability is the corruption that it inadvertently enables.

Transparency in politics is usually seen as a crucial element to a functioning democracy, but the flip side to that openness and accountability is the corruption that it inadvertently enables.

It may sound counterintuitive, but congressional transparency — the requirement for the votes of politicians in Congress to be made public — actually has a dark side that most Americans never consider.

Transparency has been corrupted by special interests and turned into a weapon of the establishment — and some researchers even believe that this so-called “transparency” has such a detrimental effect on policy that it is downright bad for democracy.

In 1970, US President Richard Nixon signed the Legislative Reorganization Act which made congressional votes public. In an RT special report, Brigida Santos spoke to the experts who explain how this public voting has damaged democracy and led to bad legislation. 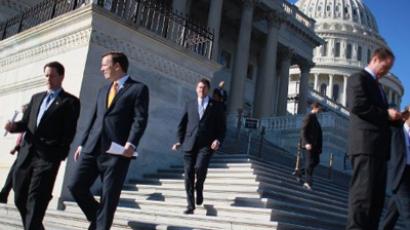 According to James D’Angelo, researcher at the Congressional Research Institute, public voting has been an exercise in opening members of Congress up to bribery. “As soon as we open up the votes of legislators, they can be used as ammunition,” D’Angelo said.

If legislators know their votes are public, they feel bound to vote for the policies which will please their biggest donors, who are often big businessmen whose interests are vastly different than the interests of average American voters. In other words, the system has been hijacked by lobbyists for special interests and citizens are merely under the illusion that this transparency benefits them.

In 2010, the Supreme Court ruling in Citizens United vs. the Federal Election Commission gave corporations the green light to drive American policy by spending unlimited amounts of money on political advertising — and when they spend, they expect the recipients of their campaign cash — the politicians — to vote in such a way that benefits them. Essentially, the Citizens United decision ensured that the voices of rich corporations are a lot louder and more powerful than the voices of ordinary Americans who still believe this kind of “transparency” benefits their political system.

What’s more, D’Angelo said, it is almost completely impossible for the average concerned citizen to keep up with what is happening in Congress on a daily basis. During the 114th congressional session, more than 12,000 bills were introduced — and over 9,600 have been introduced in the 115th session so far.

“Anyone who tells me they follow congress, would require just for the Commerce Committee alone, and there’s 20 standing committees, to have read over a million pages per committee. You’re talking 20 to 100 million pages of legislation, where a lot of it is filled with just bluster,” D’Angelo said.

Lobbyists on the other hand, are very good at following what is happening in Congress — and they’ve poured a lot of money into doing it. According to the Center for Responsive Politics, lobbying firms spent approximately $3.36 billion last year, with corporations as the biggest spenders. Between 1998 and 2017, corporate giants ExxonMobil, Lockheed Martin, Verizon, and Boeing each spent more than 200 million dollars shaping US policies.

But it’s not just lobbyists in the US having a detrimental effect on policy. Massive foreign corporations (pharmaceutical companies, oil giants, etc.) and political entities from countries like Israel, Saudi Arabia, and the United Arab Emirates are also exerting influence on the political system.

Watch Brigida Santos’ full report on how transparency turned into a political tool, keeping ordinary citizens in the dark while billionaires get richer by controlling American policy.