The FBI has until April 11 to give Congress the unredacted document that launched the 2016 probe into the Trump campaign or face legal action in federal court, House Intelligence Committee chair Devin Nunes said.

Almost two years since the FBI opened a counterintelligence investigation into the Trump campaign, it remains a secret on what basis that probe was launched. The portion of the bureau’s “electronic communication” (EC) memo remains heavily redacted, according to Nunes (R-California).

The FBI informed the House Intelligence Committee last month that the bureau “would refuse to further unredact the EC based on its supposed sensitivity,” according to the letter Nunes sent Wednesday to the Assistant Attorney General Rod Rosenstein and to FBI Director Christopher Wray.

“The document in question is not highly classified, and law enforcement sources have apparently not been shy about leaking to the press information that the Department and Bureau refuse to share with Congress,” Nunes wrote.

Nunes letter to Deputy AG Rosenstein & FBI Director Wray demanding they comply with the committee’s subpoena to review documents pertaining to the bureau’s Russia investigation. In particular, the un-redacted version of the original investigative document. https://t.co/zhp0QxVvV4pic.twitter.com/NgCC0BNK1s

This is most likely a reference to the New York Times report from December 2017, which claimed that the Trump probe was not based on the dodgy dossier compiled by British spy Christopher Steele and funded by Hillary Clinton’s campaign, but on the intelligence provided by Australia about comments made by Trump campaign aide George Papadopoulos. The Times based the story on “four current and former American and foreign officials,” without disclosing any names.

That is actually acknowledged in the February 2 memo by the committee’s Republican majority, signed by Nunes. The memo, however, says the probe was initiated by FBI agent Peter Strzok ‒ the same agent who took part in the Clinton email probe and spent several weeks as part of special counsel Robert Mueller’s team. 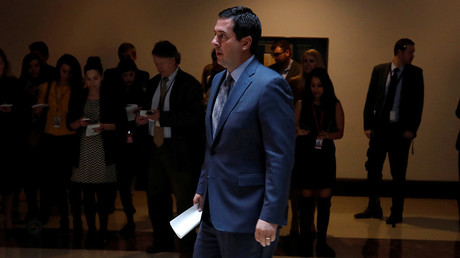 Strzok also exchanged thousands of text messages with his paramour and FBI attorney Lisa Page, that “demonstrated a clear bias against Trump and in favor of Clinton,” and reflect “extensive discussions about the investigation, orchestrating leaks to the media,” according to the Nunes memo.

The counter-memo put together by the committee’s Democrats and published on February 24 does not dispute that Strzok initiated the investigation, but argues rather that his texts with Page are “irrelevant.”

Most of the Nunes memo and the Democrats’ counter-memo is about the series of Foreign Intelligence Surveillance Act (FISA) applications targeting Trump campaign aide Carter Page. Nunes has argued that the original application and the three 90-day extensions were primarily based on the Steele dossier. Democrats are saying that’s not true.

Those FISA applications are among the documents requested in the August 2017 subpoena. Yet the Department of Justice has refused to provide access to any more House Intelligence Committee members, in what Nunes described as “arbitrary resistance to legitimate oversight.”

Failure by the FBI and the DOJ to provide all the documents by April 11 deadline will result in the committee seeking civil enforcement of the subpoenas in a federal district court, Nunes wrote in the letter.