London police have arrested two men after a man was held hostage in a horrific two-day kidnap ordeal. A criminal gang allegedly stripped the victim, beat him up, threatened him with knives and a gun, and later robbed his parents’ home.

The 24-year-old victim, from the London borough of Croydon, was lured into a house by two male acquaintances on December 4 after they had spotted him wearing a Rolex watch. The victim was asked whether the £9,000 timepiece was genuine before he was led into the house where a group of men were waiting, armed with weapons including a gun.

During a 50-hour ordeal the man was stripped, tied up, threatened with a gun and kicked in the face, leaving him with bruised lips and a lump on his forehead. The gang then forced him to call his parents and asked for a ransom. When his parents said they could not pay, their son was forced to hand over keys to their home and two of the gang allegedly burgled the property.

Two suspects can be seen on CCTV footage released by the Metropolitan Police, as they entered the victim’s parents’ home in Sydenham on Wednesday, December 6. A large sum of cash, designer handbags, sunglasses and more Rolex watches, worth “a significant sum,” were stolen. 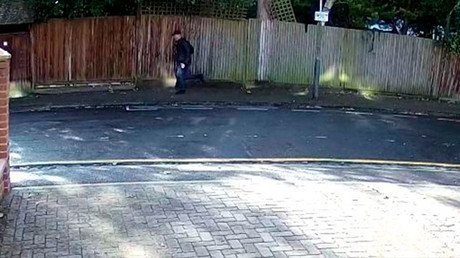 The men, aged 28 and 19, have been arrested on suspicion of kidnap. The footage shows one suspect, described as a black man with dark facial hair and wearing a high-viz jacket over a parka, spotting the camera. He returns with an accomplice, wearing an orange high-viz jacket, to enter the property, both men covering their faces.

The suspects were questioned by South London police, who say they are still hunting another two suspects in connection with the “vicious and prolonged attack,” that may have involved up to 12 attackers.

The victim managed to escape after he was driven to his bank to withdraw money. Police believe the alleged attackers stayed in the car by the Metro bank in North End (Croydon) to avoid having their faces recorded on CCTV, which allowed the victim to escape.
He fled to a nearby church, Croydon Minster, where he pleaded for help and police were then called.

Detective Sergeant Samuel Bennett said in a statement: “This was a vicious and prolonged attack of a nature that, thankfully, is very rare. It has left the victim utterly distraught and traumatized. We are urgently seeking any information on the other individuals involved, who we believe could number up to twelve, but particularly those whose images and details we have released, notably the two men who showed up at the address in high visibility vests.”

“These men are dangerous and it is important that we apprehend them before they can target anyone else,” he added.