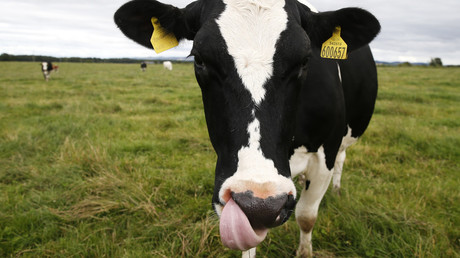 Dashcam footage has revealed the hilarious moment one police officer in Scotland realized the uniform would not automatically win the respect of a galloping cow that had escaped from its field on a rural roadside.

In a odd moment of bovinity, the policeman, identified as “PC Ross” in the video, is seen going to the grass verge to direct the cow back into a field. Unsurprisingly, the cow fails to obey the man’s instructions and instead charges into the road. The spooked officer then scarpers as the beast gallops towards him.

Sunday blues?! Here is PC Ross & his udderly amusing attempt to direct an errant cow back to its field! Pleased to report that neither PC Ross or any animal were harmed during this incident & despite some initial reluctance the animal returned to its field. 🤭 #keepingroadsclearpic.twitter.com/mZ3yT3HJr5

Police Scotland reported that neither PC Ross nor the cow were harmed in the incident and the animal was safety returned to its field.

However, the encounter could be considered a lucky escape for the officer. A 2015 report by the UK’s Health and Safety Executive found that the cow was the most dangerous animal in the country after being linked to the deaths of more than 70 people since the turn of the century.