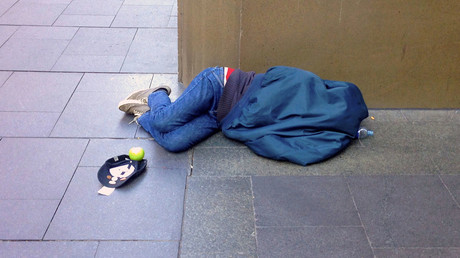 Homeless people in the UK are being told to sleep rough so they can get help from local authorities, a charity has found.

Research by St. Mungo’s found some homeless people who showed up at their local council seeking help were turned away or told to sleep on the streets in order to access services.

Of the 40 homeless people interviewed by St. Mungo’s, some three-quarters said they slept on the street the night after they had asked a council for help.

“We decided to go to the local council and they told us that we had to sleep rough for three nights in a row before they could actually do anything to help us. We just felt complete despair,” one person told the charity.

Another St. Mungo’s client spoke of the violence they have experience while sleeping rough.

“I’ve been beaten up quite a few times sleeping in doorways, or even in cars,” the person said.

“They smash the window in on top of you, spit on you, urinate on you, try and set you on fire. I’ve had all of those things happen to me.”

The report found that 129 rough sleepers have died in London since 2010 and a quarter of the people interviewed reported being physically assaulted.

There has been a 30 percent rise in the number of deaths among rough sleepers in the last year alone.

St. Mungo’s is calling on the national government to fundamentally reform the system to ensure no one is sent away by local authorities when they have nowhere to sleep.

The charity is taking part in a mass lobby of Parliament on Wednesday in support of the Homelessness Reduction Bill, which has its second reading in the House of Commons next Friday.

“Too many people are dying on our streets and too many are living with damaging long-term consequences of not having a roof,” St. Mungo’s CEO Howard Sinclair said.

“St. Mungo’s believes that the system for assisting people who are at risk of sleeping rough in England requires fundamental reform.

“The funding package announced by the prime minister this week is a promising start. We hope it is the first step to a new and coherent national strategy to end rough sleeping.”