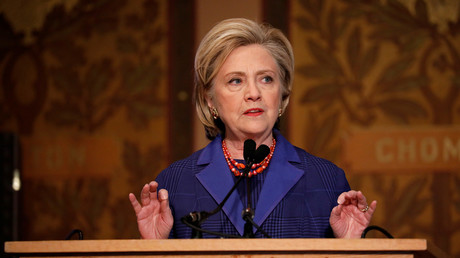 Hillary Clinton has a new target to blame for her losing the 2016 presidential election and, surprisingly, this time it’s not the Russians. According to the Democrat, Facebook is behind her failure to win the White House.

The crux of the argument is that Facebook charged the Trump campaign team less for advertising on the platform and therefore seemed to favor his candidacy. However, this is exactly how Facebook – a commercial enterprise – works: the more impressions, clicks, interactions, shares and comments a post generates, the less Facebook relatively charges the advertiser to reach people. And this is where the Trump campaign succeeded.

Simply put, team Hillary was not as social media savvy as team Trump and was therefore charged more for advertising on the platform. Former Facebook advertising staffer Antonio García Martínez explained it all in a February 23 article for Wired entitled ‘How Trump Conquered Facebook – Without Russian Ads.’

“During the run-up to the election, the Trump and Clinton campaigns bid ruthlessly for the same online real estate in front of the same swing-state voters,” Martinez writes. “But because Trump used provocative content to stoke social-media buzz, and he was better able to drive likes, comments, and shares than Clinton, his bids received a boost from Facebook’s click model, effectively winning him more media for less money.”

Following publication of the Wired piece, Trump campaign advisor Brad Parscale tweeted to corroborate. He maintained that, due to Facebook’s cost effectiveness metrics, Trump posts were highly successful on the platform compared to Clinton’s.

I bet we were 100x to 200x her. We had CPMs that were pennies in some cases. This is why @realDonaldTrump was a perfect candidate for FaceBook.

According to Facebook, Cost Per 1,000 Impressions or CPM is “a common metric used by the online advertising industry to gauge the cost-effectiveness of an ad campaign. It’s often used to compare performance among different ad publishers and campaigns.”

Parscale’s message was then retweeted by Tech Crunch contributor Kim-Mai Cutler‏, and her tweet in turn was picked up and shared by Clinton herself, with the former presidential hopeful apparently calling for an overhaul of social media in election periods without elaborating on her own campaign’s use of such platforms.

I can’t believe this tweet isn’t going viral. Do people not really care that Facebook may have systematically charged the Clinton campaign an order of magnitude or two more than it was charging Trump to reach American voters? (Which is not allowed in other mediums by law.) https://t.co/S2OgxfgcGq

We should all care about how social media platforms play a part in our democratic process. Because unless it’s addressed it will happen again. The midterms are in 8 months. We owe it to our democracy to get this right, and fast. https://t.co/aM3pRrZW4J

Facebook is the latest in a growing string of who and what Clinton says derailed her chances of winning the presidency. In her post-election book ‘What Happened,’ the former candidate outlined diverse issues she felt negatively impacted her run, including the FBI investigation of her email server, supposed Russian election interference, and her fellow Democrat Bernie Sanders – for challenging her nomination.